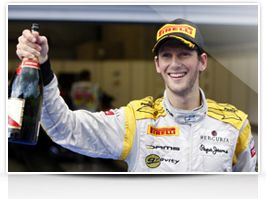 Pirelli’s GP2 and GP3 medium compound tyres along with the P Zero wets enjoyed an action-packed Spa-Francorchamps round, equipping Formula One’s feeder series under extremely changeable conditions during the Belgian Grand Prix weekend. Being versatile tyres designed to work well in a wide range of conditions, the P Zero wet and medium dry rubber dealt very well with the mutable ambient and track conditions and once again tyre management was a crucial element to be competitive during the races. With the exception of Sunday’s sessions, throughout the weekend GP2 and GP3 drivers were confronted with changeable weather and mixed track conditions as frequently one part of the track was full wet while another part was damp or even clearing up. By regulation, GP3 and GP2 teams receive only two and three set of wets respectively for each race weekend, meaning that drivers had to take good care of their rain sets, especially when running on the drying parts of the track. Pirelli’s Racing Manager Mario Isola explained: “Racing at Spa-Francorchamps is all about experience and this GP2 GP3 round was no exception. The teams and the most skilled drivers knew exactly what to do and how to tackle the tricky track conditions, choosing the right tyre type at the right moment and putting in place a good race strategy. On Sunday the races were held in dry conditions with the drivers enjoying some great action running on our medium slicks. I wish to congratulate our former test driver Romain Grosjean for clinching the GP2 title on this second last round. I do hope to see him and other GP2 graduates running on our P Zero F1 tyres next season. For the moment, everyone at Pirelli wishes Stefano Coletti a speedy recovery.” GP2 Feature Race winner Christian Vietoris (Racing Engineering) commented: “In qualifying I took pole position on the Pirelli wets thanks to a fastest laptime set on the final part of the session. On Saturday it was tricky to race in wet conditions but I had good pace and felt confident running on the P Zero rain tyres. Same for the slicks which gave me consistent performance in dry conditions. At the beginning of the year I struggled a bit to adapt to the new Pirelli tyres but now, after having practiced and worked on the car set-up, the feeling is good.” GP3 Race One winner Valtteri Bottas (Lotus ART) commented: “On Saturday I had good grip and road holding racing on Pirelli’s wets and this notwithstanding the tricky conditions of the track. I had good pressure and temperature in my tyres and enjoyed a great win. It was fine also to run on the medium compound tyres in dry conditions though I would have preferred Sunday’s race to be wet because it would have been easier to overtake.” The Belgian round draws to an end crowing Romain Grosjean (DAMS) the 2011 GP2 Series Champion. With one race weekend left to go, he leads the standings on 83 points followed by Giedo Van Der Garde (Barwa Addax Team) and Jules Bianchi (Lotus ART). Barwa Addax Team is still on top of the GP2 Teams’ standings. While the battle for the GP2 title is over, the GP3 Championship is still open. After Spa-Francorchamps, Valtteri Bottas (Lotus ART) leads the GP3 championship followed by his teammate James Calado while their team takes the top spot in the GP3 Teams’ standings on 45 points. Pirelli’s P Zero GP2 and GP3 tyres will be next seen at the Monza circuit in Italy where the final round of the 2011 season will take place, running from 8 to 11 September alongside the Formula One Italian Grand Prix.

For further information please contact Laura Bartoli on +44 7500 877 304 or laura@mediatica.co.uk