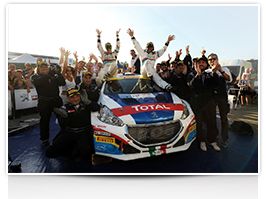 Paolo Andreucci and Anna Andreussi dominated the Rally del Friuli Venezia Giulia in their Pirelli-equipped Peugeot 208 T16, clinching a record-breaking ninth Italian title with two rallies on their domestic championship still to go. Andreucci overcame the fearsome reputation of the all-asphalt event (no driver has ever managed to claim two consecutive Rally del Friuli wins in the last 12 years) and made the most of new tyre regulations on the Italian championship, as a wide variety of manufacturers went head-to-head with the latest generation of FIA-homologated rubber for the first time. This is a single pattern of tyre for all conditions, as used in the World Rally Championship. The ultra-successful Peugeot Italia crew repeated their Friuli victory of 2014, dominating the event from the first to the last stage. Second place also went to a car using the latest P Zero RK tyres – crewed by Alessandro Perico and Mauro Turati – underlining the technology and performance built into the latest Pirelli rally products, designed with the exactly the same philosophy that characterises P Zero tyres for the road. Yet more success for Pirelli came thanks to former European champions Luca Rossetti and Matteo Chiarcossi, who won the two-wheel drive class and finished fifth overall in a Pirelli-equipped Renault Clio R3T. Corinne Federighi, driving a Renault Twingo R2, aditionally put the ladies’ title beyond doubt: the third title to be clinched by Pirelli in Italy this year, together with those of Andreucci and junior champion Michele Tassone. Completing the success story for Pirelli was Mimmo Guagliardo, who took the historic win (also valid for the FIA European Historic Championship) on his debut in a Group B Porsche 911. Paolo Andreucci said: “Total happiness – that’s how I’m feeling at the moment. It’s been a fantastic championship, which we’ve now wrapped up with two rallies to go. Many thanks to Pirelli and all our partners, who have supported us with passion and commitment all year.” Pirelli’s product manager Terenzio Testoni concluded: “Winning is always difficult, but winning again is probably even more so: especially against such strong opposition. As a result, we are very happy with the winning performance of our latest FIA-homologated P Zero RK tyres, which showed their capabilities overall and in the two-wheel drive class, with both factory-supported and private entries. Most of all, we’re delighted with this ninth title for Paolo and Anna. Along with Peugeot Italia, they have been part of our story for a very long time, with Paolo also being our test driver for rally products. Massive congratulations to them both, from all of us at Pirelli.” The next round of the Italian Rally Championship is the innovative Rally Roma Capitale, which runs round the streets of Italy’s famous capital from 18-20 September.