In the GP of The Netherlands the Italian reaches the title one round before the end of the Championship and thanks Pirelli, that with this victory leads to 68 World Championship victories in this sport, for the performance of the SCORPION™ MX tyre line 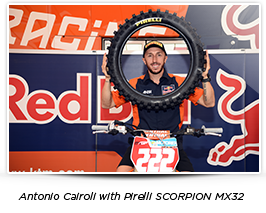 It all concluded yesterday. The TT Circuit Assen was the stage for Antonio Cairoli, riding his Pirelli-shod KTM, to rule the FIM Motocross World Championship for the ninth time.
Thanks to the performance of the Red Bull KTM Factory Racing rider, Pirelli has achieved its 68th World Title in this discipline, confirming itself as the most successful tyre brand in the history of motocross.

Antonio Cairoli closed the title speech in the MXGP class one round before the end of the Championship to crown a season practically perfect. After two seasons marked by some injuries, Cairoli centered on the ninth title of his incredible career that has seen him at the top of world rankings for fifteen years.

This season the World Champion - who with nine titles can now aim to match the record of ten held by Belgian Stefan Everts - has shown impressive consistency by winning six GPs so far and finishing as runner-up in another four GPs. As in recent years, the 31 year old Sicilian from Patti was able to count on the unmatched performance of Pirelli's SCORPION ™ MX tyres. In particular the SCORPION ™ MX32 ™ Mid Soft front and SCORPION ™ MX32 ™ Mid Soft rear, which has been the most frequently used selection by Cairoli and the other Pirelli equipped riders in the MXGP and MX2 classes.

At the end of the weekend Antonio Cairoli wanted to thank Pirelli, declaring: “After two unlucky seasons, going back to winning the world title is something fantastic that we have achieved with the will and the work of the whole team and our technical partners. That's why I want to thank Pirelli”.

“I want to congratulate Tony for this successful season,” said Pirelli Moto Racing Activities Giorgio Barbier. "He has managed to get nine world titles in fifteen years and by achieving something unique has become a true legend in motorcycling world. As Pirelli we are pleased to have been supporting Tony and the KTM Factory Racing team for many years and have been contributing to these achievements thanks to the performance of our tyres, which are now a benchmark in the paddock and for all the fans of this discipline. Like all our racing products, the tyres used in the FIM Motocross World Championship are easily available sale and anyone can buy them. We have always invested a lot in the FIM Motocross World Championship, as demonstrated by the 68 world titles we have gained since 1980, and we will continue to do so alongside Tony and the many riders and teams that each year decide to entrust Pirelli to fight and give a show in this beautiful Championship.”

The Grand Prix of the Netherlands, the penultimate test of the FIM Motocross World Championship, took place in the circuit drawn in the famous TT Circuit of Assen, the temple of speed. On the Dutch track, featuring sandy terrain made particularly wet and challenging by falling rain on Saturday, the SCORPION MX ™ 32 ™ Mid Soft front and the SCORPION ™ MX32 ™ Soft rear have once again proved to be the best performing tires on these conditions, allowing Pirelli to fill the podiums of both categories.

With a double moto haul Jeffrey Herlings won in MXGP, ahead of Romain Febvre (fourth and third) and Max Anstie (third and fourth). Cairoli classified second and sixth place in the two races.

In the MX2, with only one GP left until the end of the championship, Pauls Jonass (first and seventh at Assen) gained another point on Jeremy Seewer (fifth and second) and now has a forty-one point advantage; the GP went to Spain's Jorge Prado with second and first positions in the motos.

In seven days time the riders will reconvene for the Grand Prix of Pays de Montebeliard in France, the closing chapter of the 2017 FIM Motocross World Championship.