After the fantastic triple sweep at the Grand Prix of Bulgaria Pirelli Scorpion MX has dominated the second round of the FIM Motocross World Championship thanks to the victories not only in MX1 with Antonio Cairoli and in MX2 with Marvin Musquin but in the Veteran’s World Cup with Mats Nilsson and in the opening round of the new 125cc two-stroke European Championship with French teenager Jordi Tixier. 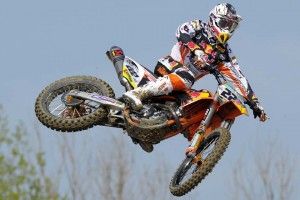 MX1 After taking the first two positions in the premier class at Sevlievo, the MidSoft 32 front and rear combination filled the first four at the Grand Prix of Lombardia. In front of his home crowd Antonio Cairoli seized the overall victory, the first for Pirelli on the factory KTM 350SX-F. The defending champion walked the top step of the podium thanks to 2nd and 1st positions in the two motos and finished ahead of Belgian Clement Desalle, who he chased in the first sprint, and in front of team-mate Max Nagl; the German also surrendering the lead in the championship standings. It was an unlucky day for 2008 world champion David Philippaerts, as the Italian lost the lead in a heavy crash on the second lap of the first moto, recovered in fine style back to 5th but then dropped to 15th with a broken exhaust. His final place was 19th after a noise penalty of one minute. The 25 year old Yamaha Monster Energy MX Team rider showed his speed again in the second moto with a start-to-flag second place finish behind Cairoli. Fourth overall was Yamaha Monster Energy Ricci MX Team’s Ken De Dycker. 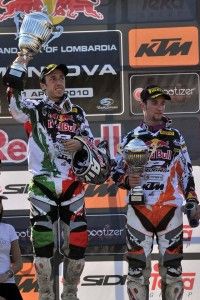