Winner of all three classes at the opening round in Bulgaria and dominator of four categories at the Grand Prix of Lombardia a week later, the Pirelli Scorpion MX was again a victorious force over the Grand Prix of Netherlands for the third stop on the 2010 MXGP calendar thanks to Antonio Cairoli in MX1, Jeffrey Herlings in MX2, and Swede Mats Nilsson who owned the Veteran’s World Cup contest. WEATHER    Sunny  TEMPERATURE     24° HUMIDITY    61%    TERRAIN             Sand 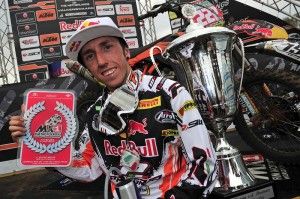 MX1 The Scorpion MidSoft 32 front and Soft 410 rear were the choice of all protagonists in the premier class, as the first seven riders in the classification benefitted from Pirelli traction. Antonio Cairoli celebrated his second consecutive success with the works 350SX-F after easing to victory in race one and also claiming race two in spite of two small crashes. The former three times world champion beat Steve Ramon, 2nd and 3rd in the motos, and David Philippaerts, who registered his first podium result of the season. It was an unspectacular day for KTM’s Max Nagl, who was 5th overall behind Estonian Tanel Leok; unlucky factory Suzuki rider Clement Desalle, dislocated his right shoulder in the first moto and took no further part in the meeting. 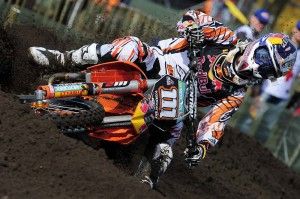 MX2 Beaten across the Dutch sand Marvin Musquin was lucky to be able to compete on Sunday after suffering a heavy crash in Saturday’s Qualification Heat. The World Champion could ride to two decent points-scores for 5th overall. Another works KTM took both of the spoils with the Scorpion MidSoft 32 front Soft 410 rear playing its part in the phenomenal home domination by rookie Dutch teenager Jeffrey Herlings. The 15 year old won both motos in front of Suzuki rider Ken Roczen; the German was at least able to profit from Musquin’s misfortune to claim the red plate as championship leader. Also in evidence with the Scorpion MX booted to the third factory KTM was Shaun Simpson who celebrated his best result of the season so far with 4th place.