Already widely decorated this year in the FIM Motocross World Championship, Pirelli returned to dominate the fifth round of the 2010 series. Once more success was enjoyed in MX1 and MX2 of the Grand Prix of Catalunya thanks to Tanel Leok and Marvin Musquin respectively with the Scorpion MX MidSoft 32. In the new 125cc two-stroke world championship Jordi Tixier ruled proceedings while German Stephanie Laier took another splendid victory in the Women’s World Championship. MX1 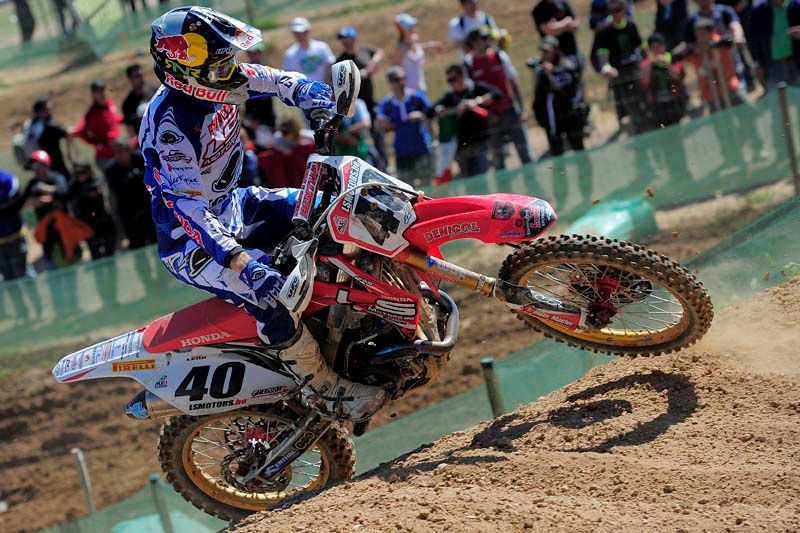 From the whirlwind of action across the Spanish circuit Tanel Leok took his LS Motors Honda with Scorpion MidSoft 32 front and MidHard 454 rear to victory in the fifth round with 7th place in the first moto and then conquering the second outing across the rough hard-pack. The Estonian was the sole runner of a different rear compound to tackle the rutty terrain as the next five classified riders opted for the Scorpion MidSoft 32. Second place belonged to factory Yamaha rider David Philippaerts, who finished in front of KTM’s Max Nagl and Antonio Cairoli; the Sicilian losing any chance of the overall win with his mistake and crash in the first moto. Thanks to valuable points obtained in the previous rounds the defending world champion already has a healthy lead at the top of the premier class standings. Overall Classification: Championship standings: MX2 With 7th place in the first race and a win in the second moto reigning world champion Marvin Musquin grabbed his second consecutive MX2 win and the fourth of the season. The Frenchman triumphed on the factory KTM with Scorpion MidSoft 32 front and MidHard 454 rear, and was the author of a fine comeback from an early crash in the first moto and then comprehensive victory in the second sprint. The podium was completed with other Pirelli riders Joel Roelants and Shaun Simpson, both using the Scorpion MidSoft 32 front and rear like Frenchman Gautier Paulin who was 5th in his first Grand Prix of the season. Only 12th overall the third member of the works KTM squad, Jeffrey Herlings, suffered with a retirement in the second moto. Overall Classification: Championship standings:
Newsroom