WorldSBK at Jerez: Race 1 goes to Chaz Davies on Ducati, Kawasaki clinches the 2016 Manufacturer Title to make it two years in a row and Tom Sykes takes Superpole® and Best Lap

The track temperature of more than 30 degrees Celsius and the poor grip on the asphalt directed the riders' choices toward soft solutions, Sykes and Rea are also on the podium, respectively second and third across the line 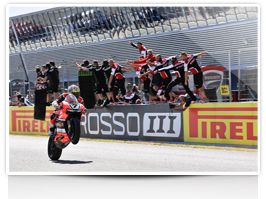 The first MOTUL FIM World Superbike Championship race of the weekend has just ended at the Andalusian Jerez circuit in Spain. Race 1 of World Superbike saw the win go to the number 7 Ducati ridden by Chaz Davies (Aruba.it Racing – Ducati), but thanks to the placements of Tom Sykes and Jonathan Rea, respectively second and third across the line, with one round left in the season Kawasaki can already mathematically celebrate the 2016 Manufacturer Title, the second in a row for the Akashi manufacturer. The solutions that Pirelli brought to Jerez confirmed the expectations of the brand with the long P. Particularly noteworthy was the performance of the rear V0248 Superpole tyre: not only did it allow Tom Sykes (Kawasaki Racing Team) to win Superpole® with a time of 1'39.190, improving the record he set last year by more than one second, but it also allowed ten other riders to break the previous record. 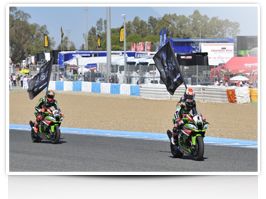 As for the race, thanks to the 35°C asphalt temperature and considering the fact that the Jerez track has a rather dated surface that provides poor grip, most of the riders opted for soft solutions on both the front and rear. Of these, the front U0176 SC1 development solution and the V0377 SC0 development solution were by far the most used by the riders. In Race 1, Jonathan Rea (Kawasaki Racing Team) got off the line well, but poleman and teammate, Tom Sykes, stayed solidly in the lead. On the second lap, Davide Giugliano and Xavi Forés were forced to abandon the race after contact. A lap later, Alex Lowes was also forced to retire after crashing. In the meantime, Rea fell back to third place, overtaken by Chaz Davies (Aruba.it Racing – Ducati), who also overtook the other Kawasaki standard-bearer for the lead in the fourth lap. The top three spots would remain unchanged until the end of the race, with Davies finishing more than three seconds ahead of Tom Sykes and more than seven ahead of Jonathan Rea. Fourth place went to Nicky Hayden (Honda World Superbike Team), thirteen seconds behind the Ducati rider. The third place finish was not enough for Rea to be crowned 2016 World Champion, but with 44 points ahead of teammate Tom Sykes and three races left to go, tomorrow the Northern Irishman could lift the cup for the second year in a row. Thanks to their riders finishing second and third, Kawasaki, on the other hand, mathematically clinched the Manufacturers Title for the second consecutive year.

Race 1 standings: 1) Chaz Davies (Aruba.it Racing – Ducati) 2) Tom Sykes (Kawasaki Racing Team) 3) Jonathan Rea (Kawasaki Racing Team) 4) Nicky Hayden (Honda World Superbike Team) 5) Michael Van Der Mark (Honda World Superbike Team) 6) Sylvain Guintoli (Pata Yamaha Official WorldSBK Team) 7) Leon Camier (MV Agusta Reparto Corse) 8 ) Jordi Torres (Althea BMW Racing Team) 9) Markus Reiterberger (Althea BMW Racing Team) 10) Joshua Brookes (Milwaukee BMW) … The Pirelli solutions chosen by the riders for Race 1: With asphalt temperatures higher than 30°C and considering the fact that the Jerez track surface is rather dated and therefore does not provide much grip, the riders' choices fell to the softer solutions, precisely because of their ability to compensate for the poor tarmac grip. Specifically, on the front, most of the riders chose the U0176 SC1 development solution (option B), whereas others went with the better-known S1699 SC1 development tyre (option A). The only riders who chose the standard SC2 tyre were Leon Camier, Markus Reiterberger and Péter Sebestyén. On the rear, practically all the riders opted for the V0377 SC0 development solution (option B)that made its début this year at the Donington Park round and was then taken to Misano, Lausitzring and Magny-Cours as well, rounds where it proved to be very popular. Only three riders, Alex Lowes, Nicky Hayden and Luca Scassa, opted instead for the standard SC0 (option A). WorldSBK at Jerez: Race 1 goes to Chaz Davies on Ducati, Kawasaki clinches the 2016 Manufacturer Title to make it two years in a row and Tom Sykes takes Superpole® and Best Lap
Newsroom