In Race 2 the Brit brought home the second double win of the season for Kawasaki, while teammate Jonathan Rea, second, praises the performance of the Pirelli tyres 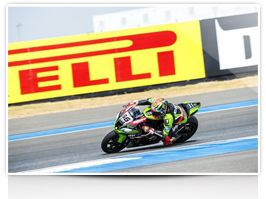 At the Chang International Circuit of Buriram, Thailand, the second round of the MOTUL FIM World Superbike Championship just came to a close. Today all of the riders in the top category were on the track for Race 2, as well as the Supersport riders for their only race of the weekend after Superpole yesterday. In the Superbike category the green machines from Akashi were once again uncatchable by the rest today with a win, the first of the season for Tom Sykes (Kawasaki Racing Team), and a second place finish for teammate Jonathan Rea, who had already won Race 1 yesterday. In Supersport, Jules Cluzel (MV Agusta Reparto Corse) was back on top after an unfortunate race in Australia. The Pirelli racing range products were confirmed as the winning choice for this second round of the MOTUL FIM World Superbike Championship. In the top category the riders used DIABLO™ Superbike range slicks, SC0 on the rear and SC2 on the front, and they used grooved DIABLO™ Supercorsa SC0 on the rear and SC1 on the front in Supersport. Pirelli tyre performance in these first races was also praised by reigning FIM World Superbike Champion, Jonathan Rea, who had this to say at the end of the weekend: “I made the fast lap just a few laps from the end, thanks in part to Pirelli and the incredible job they are doing this year! The days of tyre decay after 2 or 3 laps are just a distant memory. Now, if you manage your tyres well in the first part of the race, you can push really hard in the final laps.” 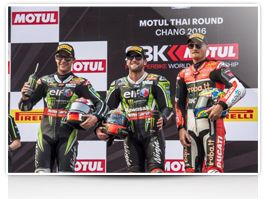 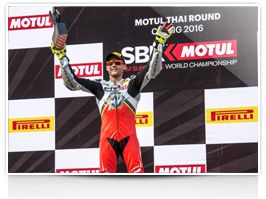 In the second race of the FIM Supersport World Championship season, after the pole position earned on Saturday, Frenchman Jules Cluzel astride his team MV Agusta Reparto Corse MV Agusta F3 goes on to win the race held today as well. The race was actually quite a heated battle with many exciting passes, especially in the finale, thanks in part to the performance the riders had beneath them in the DIABLO™ Supercorsa range tyres, specifically the rear SC0 all of them chose. Off the line it was the American, Patrick Jacobsen (Honda World Supersport Team) who left the rest behind, moving into the lead. The American seemed well on his way to a win and remained the undisturbed leader until two laps from the end when both the MV Agusta Frenchman and Turkish rider Kenan Sofuoglu (Kawasaki Puccetti Racing) overtook him, relegating him to third place, which is where he stayed until the chequered flag came out. For Cluzel this is the first win of the season, whereas Sofuoglu, after a long battle on the track, got the better of his teammate, Randy Krummenacher (Kawasaki Puccetti Racing) who, after a great win in the Australian opening round, was forced to settle for a fourth place finish. Supersport standings: 1) Jules Cluzel (MV Agusta Reparto Corse) 2) Kenan Sofuoglu (Kawasaki Puccetti Racing) 3) Patrick Jacobsen (Honda World Supersport Team) 4) Randy Krummenacher (Kawasaki Puccetti Racing) 5) Kyle Smith (CIA Landlord Insurance Honda) 6) Alex Baldolini (Race Department ATK#25) 7) Zulfahmi Khairuddin (Orelac Racing VerdNatura) 8 ) Lorenzo Zanetti (MV Agusta Reparto Corse) 9) Gino Rea (GRT Racing Team) 10) Ondrej Jezek (Team GoEleven) … The Pirelli solutions chosen by the riders for Race 2 and Supersport: In Race 2 of the MOTUL FIM World Superbike Championship, the riders basically confirmed the choices they had made yesterday for Race 1. On the rear everyone, including Karel Abraham (Milwaukee BMW) and Thai wild card Anucha Nakcharoensri (Yamaha Thailand Racing Team) who had chosen the S1867 SC1 development yesterday for Race 1, opted for the standard SC0 today in Race 2, which had already proven to be the best solution on Saturday to take on the particularly high temperatures of the Thai tarmac. On the front there were no changes with respect to Race 1. The standard SC2 solution was confirmed as the riders' favourite because of its characteristics, the most suited for high external temperatures because it guarantees solidity to the tread band. The Ducati riders, Chaz Davies and Davide Giugliano, Michael Van Der Mark (Honda World Superbike Team), Jordi Torres (Althea BMW Racing Team) and Matteo Baiocco (VFT Racing) stuck with the S1699 SC1 development solution. 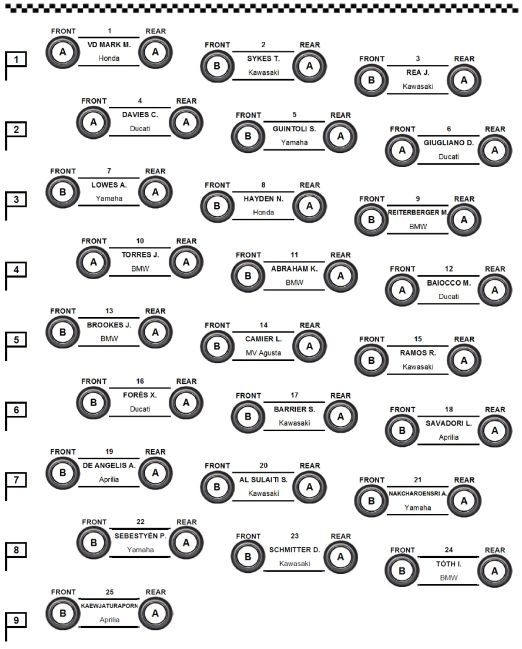 In Supersport all of the DIABLO™ Supercorsa range tyres were used. The front solution used the most in the race was the standard SC1, the softest in the range. Only four riders chose the SC2: Patrick Jacobsen, Kyle Smith and Ratthapong Wilaroit on Honda and Lorenzo Zanetti on MV Agusta. On the rear the riders unanimously went with the standard SC0 solution. 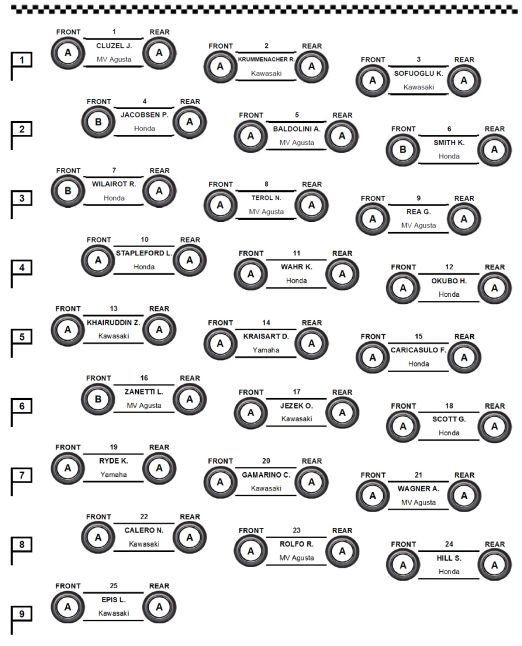