The Northern Irishman takes home his third consecutive win out of three races held ahead of teammate Tom Sykes and Michael Van Der Mark, who started from pole position

Jonathan Rea (Kawasaki Racing Team) won Race 1 of the MOTUL FIM World Superbike Championship which was held at the Chang International Circuit of Buriram, Thailand. The Northern Irishman, reigning World Champion, crossing the wire ahead of teammate Tom Sykes, second, and Michael Van Der Mark (Honda World Superbike Team) thus took his third win in a row for the season after his double in the Australian opening round, confirming that he is definitely one of the contenders for the title again in 2016.

Michael Van Der Mark (Honda World Superbike Team), after taking his first Superbike pole position just a few hours before the race with a time of 1’33.452, was unable to capitalise on the result, allowing the two Kawasakis ridden by Sykes and Rea to get the better of him at the start. Jonathan Rea (Kawasaki Racing Team) got off the line to a quick start straight away, but during the second lap Tom Sykes took back the race lead, a position that he managed to hold onto until the sixteenth lap when he was overtaken by Jonathan Rea, who would ride under the chequered flag first.

… The Pirelli solutions chosen by the riders for Race 1: In Race 1 the standard DIABLO™ Superbike range tyres were used almost exclusively. This is the line of slicks that Pirelli uses for the Superbike category and sells to the general public through Pirelli retailers. For the rear, all the riders, except Karel Abraham (Milwaukee BMW) and Thai wild card Anucha Nakcharoensri (Yamaha Thailand Racing Team) who opted for the S1867 SC1 development solution, chose the standard SC0 tyre, excellent for taking on smooth asphalt and high temperatures because it provides maximum contact on smooth tarmac and maximum traction development at high temperatures, as well as higher resistance to thermal performance decay. On the front, on the other hand, in this race the solution used by most of the riders was the standard SC2, perfect for high external temperatures because it guarantees solidity to the tread band. Opting for the S1699 SC1 development solution were only Ducati riders, Chaz Davies and Davide Giugliano, Michael Van Der Mark (Honda World Superbike Team), Jordi Torres (Althea BMW Racing Team) and Matteo Baiocco (VFT Racing). 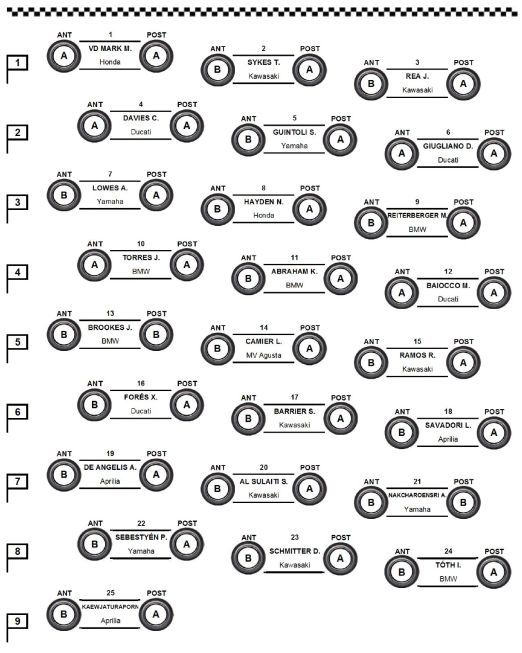