The new V0007 rear tyre, brought to the races for the first time right here on the German track, is immediately popular with the riders who choose it unanimously for the first race of the weekend at the Lausitz EuroSpeedway 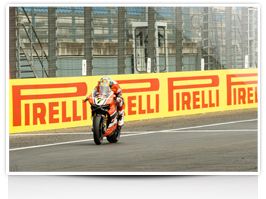 The first of the two MOTUL FIM World Superbike Championship races after the summer break at the German Lausitz EuroSpeedway circuit, a track where the factory derivative World championship has not raced since 2007, ended with the win going to Chaz Davies (Aruba.it Racing – Ducati). The Welshman's win in Race 1 was a crushing one and a demonstration of strong superiority compared with the rival riders. In fact, the Ducati rider not only won with a gap of more than ten seconds ahead of his nearest rival Tom Sykes (Kawasaki Racing Team), but he also took the Best Lap, all after having achieved pole position in the morning. There was satisfaction in the Pirelli camp as well, thanks to the performance of the new V0007 rear development solutions, an alternative to the standard SC1 tyre. The new solution was immediately popular among the riders, so much that all of them chose to use it for Race 1. This is an important result for the Italian tyre manufacturer if you consider the fact that the Lausitzring is historically a track that is rather hard on the tyres, as well 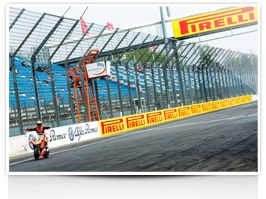 as one that has a few dips and bumps that definitely put the riders and tyres to a hard test. Not only that, but this is the first time this year that the riders place complete faith in solutions that have never before been tested and brought by Pirelli to the race, certainly an important confirmation of how the new tyres that the Milan-based company continuously develops are almost always an improvement or, in any case, provide characteristics that the riders like, a sign that development is moving in the right direction. As for the race chronicle, Chaz Davies got off the line well, followed by the trio of Tom Sykes, Jonathan Rea (Kawasaki Racing Team) and Italian Lorenzo Savadori (IodaRacing Team) who chased after him at a two-second gap. Behind them were Davide Giugliano, Nicky Hayden, Jordi Torres and Michael Van Der Mark. The first surprise of the race came in the seventh lap when Jonathan Rea, in third place at the time, crashed after going long on a corner and was forced to retire to pit lane. Unfortunately, a lap later Lorenzo Savadori (riding in a provisional podium position) followed him to pit lane after losing the front end of his bike and ending up in the gravel. 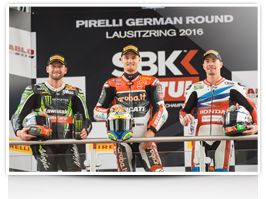 During the ninth lap, the race lost another one of its protagonists, local hero Markus Reiterberger, forced to retire because of a technical problem with his BMW. In the meantime, Chaz Davies continued to ride undisturbed at the front, taking his advantage over his nearest rival, Tom Sykes to six seconds. The second part of the race had no more exciting surprises in store for the leading riders, so Chaz Davies (Aruba.it Racing – Ducati) crossed the wire first with more than ten seconds on the second place finisher, Tom Sykes (Kawasaki Racing Team), and eleven ahead of the third place rider, Nicky Hayden (Honda World Superbike Team). This gives the Welshman his fifth win of the season after his double wins at Aragón and Imola and it strengthens his hold on third place in the overall standings. Race 1 standings: 1) Chaz Davies (Aruba.it Racing – Ducati) 2) Tom Sykes (Kawasaki Racing Team) 3) Nicky Hayden (Honda World Superbike Team) 4) Jordi Torres (Althea BMW Racing Team) 5) Leon Camier (MV Agusta Reparto Corse) 6) Michael van der Mark (Honda World Superbike Team) 7) Davide Giugliano ((Aruba.it Racing – Ducati) 8 ) Alex Lowes (Pata Yamaha Official WorldSBK Team) 9) Sylvain Guintoli (Pata Yamaha Official WorldSBK Team) 10) Xavi Forés (Barni Racing Team) … The Pirelli solutions chosen by the riders for Race 1: As mentioned above, in Race 1 the rear solution used by all the riders was the V0007 that uses the exact same compound as the standard SC1 but differs from it from a structural point of view, adopting different technological solutions. As for the front, a mix of all the options available to the riders were used, but the favourites were mainly the S1699 SC1 development solutions, chosen, by nine of the riders on the grid, and the U0176 SC1 development solution and the standard SC2, both chosen by seven of the riders on the grid. This demonstrates, as we have always said, that the front tyre choice is less influenced by the track layout or the asphalt temperature and has more to do with the personal riding style of each rider. 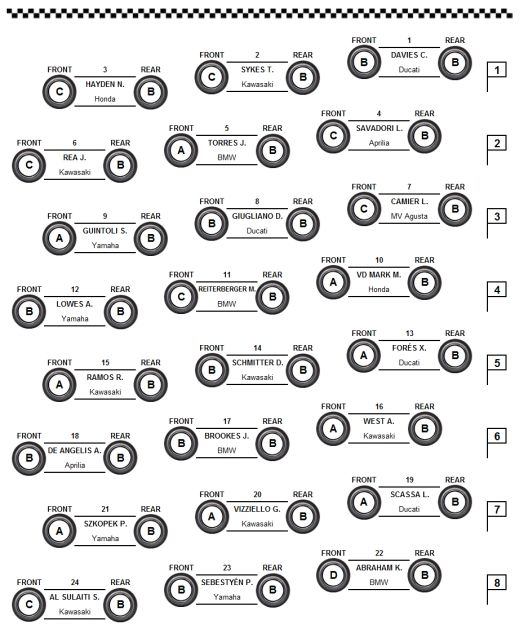