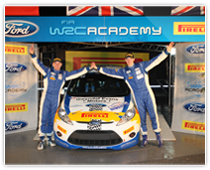 The recent Rally of Spain drew a curtain over another competitive season in the Pirelli-backed WRC Academy, and it ended on a high for Welshman Elfyn Evans, who was crowned the 2012 champion. Evans, a former Pirelli UK Star Driver, had an outstanding season in the six-round series and racked up four back-to-back victories at the Acropolis Rally, Rally Finland, Rally Deutschland and Rallye de France-Alsace. Evans’ string of impressive results landed the driver with the series title with one round remaining, but he still went onto claim third at the season-finale in Spain. As a result of being crowned WRC Academy champion, Evans will now be given the opportunity to contest all rounds of the 2013 FIA World Rally Championship in a Ford Fiesta R2, with a recce car provided on long-haul events. Or, alternatively, the Welshman can decide to contest five rounds of the 2013 series, stepping up to a Ford Fiesta S2000. We caught up with 23-year-old Evans at the end of a busy motorsport season as he relaxed in his native Wales… Hi Elfyn, congratulations on being crowned the new WRC Academy champion! How would you sum up your season? EE: “Thank you. It’s been a fantastic year both in the WRC Academy and the British Rally Championship, it’s an incredible feeling and I hope the experiences from both championships will help me progress further in 2013.” 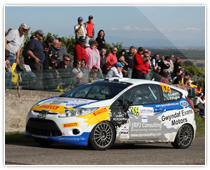 What was your favourite round of the WRC Academy and why? EE: “Finland, it was my second time competing there but I found it difficult to find a good rhythm there in 2011. It was a great feeling to go back this year, I found the experience from the year before helped a lot and it was great to take the win.” What were your best and worst moments from this year? EE: “The best moment has to be clinching the title in France with one round remaining and our worst was when we went off the road on the season’s opening round in Portugal.” You were also competing in this year’s Pirelli-supported British Rally Championship in a Fiesta R2. Do you think this experience helped your success in the WRC Academy? EE: “Yes, absolutely. We had only planned to do the first two rounds for seat time, but things started to go well and we ended up winning the R2 class on all the five rounds we entered. It certainly kept us match fit for the Academy rounds and it’s always beneficial to get extra seat-time.” What is your favourite tyre from the Pirelli range and why? EE: “My favourite tyre is the K4 gravel tyre. I found how well it performed on the rough gravel roads of the Acropolis without any punctures amazing, yet it is still able to perform in wet and muddy conditions like we had in Portugal and Spain.” How much has Pirelli helped your career? EE: “I have been using Pirelli tyres since 2008, and the tyres have always been faultless. I was selected as the UK Pirelli Star Driver in 2010 and was given a funded drive in the BRC for 2011, providing me with vital 4WD experience that would have not been possible without Pirelli. They have continued to support me since, and I can't thank them enough.” And finally, have you decided what are your plans are for 2013? EE: “No plans have yet been decided for 2013, but we are working hard to make sure we have an exciting programme in place.”