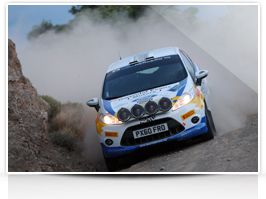 British driver Elfyn Evans celebrated winning round two of the Pirelli-supported FIA WRC Academy on the Acropolis Rally in Greece (24-26 May) by praising the outstanding performance and durability of his Pirelli tyres. One of 11 future champion rally drivers competing in the young-driver training category on the event based near Athens, Evans successfully negotiated punishing rock-strewn stages, muddy patches and ground temperatures exceeding 40 degrees centigrade to win ahead of fellow British driver Alastair Fisher and Brendan Reeves from Australia. Pirelli equipped the identical fleet of Ford Fiesta R2s, which are prepared by the M-Sport organisation in the United Kingdom and used as standard in the WRC Academy, with a version of the K4 tyre in 175/70-15 developed specifically for the Fiesta. The tyre is based on the vastly successful Scorpion cover that was used in the World Rally Championship from 2008-2010. It is lighter than the Scorpion with a focus on performance as well as outright durability. Following his victory, the first of his WRC Academy career, 23-year-old Evans said: “I’m very pleased with this result after what was the toughest rally I have done. It’s been far from easy because the stages are very rough. But my Pirelli tyres have been absolutely fantastic in how they’ve performed. Even though the stages were very, very rough in places, we’ve not had one puncture. Looking at the state of roads it’s difficult to believe that the tyres could last at rally pace for so long so it’s a big credit to Pirelli that they did. The engineers and technicians have done a fantastic job.” Paul Hembery, Pirelli’s Motorsport Director, said: “We’ve competed in the past with his father, Gwyndaf, so it’s great to see Elfyn Evans take his first win in the WRC Academy, especially on such a demanding event like the Acropolis Rally. Elfyn is a former Pirelli Star Driver in the British Rally Championship, so he has plenty of knowledge of our tyre range and its capabilities, which he was able to use to good effect. The very rough and abrasive Greek stages are some of the biggest tests that our rally tyres face all year, yet none of the top drivers reported any problems. It’s once again a testament to not just the strength and durability but also the performance of our products, which do their job perfectly to allow the champions of the future to really show their talents.” Drivers from four different continents were in action in the WRC Academy section of the Acropolis Rally, including Ashley Haigh-Smith from South Africa, Chris Duplessis from the United States of America, Jose Suarez from Spain and Australia’s Brendan Reeves. The WRC Academy resumes on the high-speed Rally Finland in early August.


For more information about Pirelli, please contact Anthony Peacock on +44 7765 896 930 or anthony@mediatica.co.uk