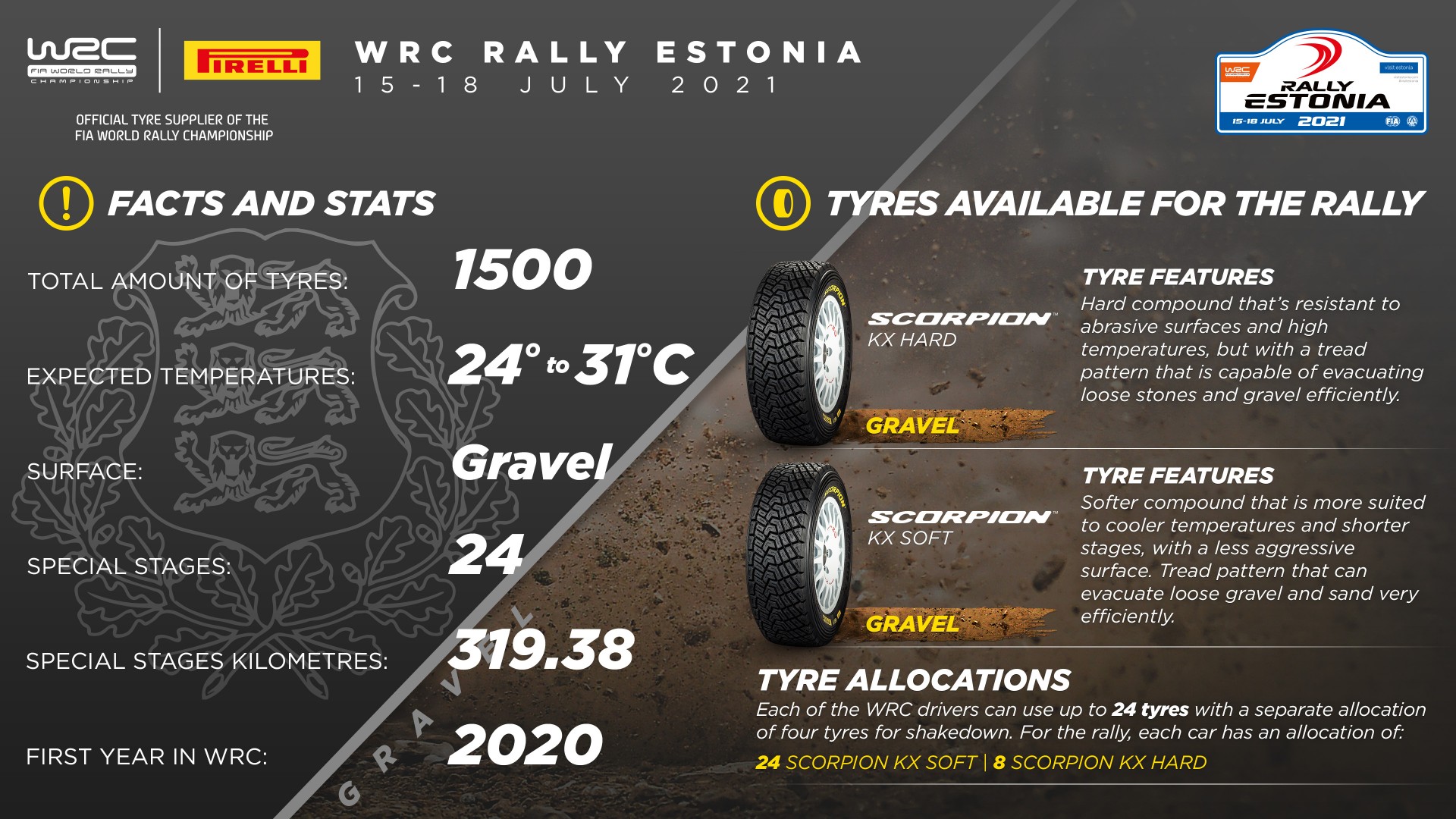 Soft compound the main choice for the first time in 2021

Another gravel challenge awaits the FIA World Rally Championship drivers and Pirelli’s Scorpion KX WRC tyres as the second half of the 2021 season begins with the high-speed roads of Rally Estonia.

The Pirelli tyres in Estonia

Scorpion KX: Pirelli’s gravel rally tyre comes in hard and soft compounds. In Estonia, for the very first time this season, the soft will be the main choice to provide grip on the sandy surface. The hard tyre will be an alternative and could be a preferred option in case of high ambient temperatures: expected for this weekend. In both compounds, the tyre features additional reinforcement, particularly in the sidewall, to guard against cuts and lacerations.

Scorpion K: Pirelli’s gravel tyres for use in the support categories also come in soft and hard compounds, and feature many of the characteristics of the KX fitted to the top cars.

Terenzio Testoni, rally activity manager: “We can expect Rally Estonia to be one of the fastest events of the season. The stages generally have a soft and sandy surface, so the traction available from the tyres can be very important for acceleration out of the corners: This is why the soft compound is the main choice for this event. There are also many crests and jumps, although these are mostly not as big as those we see in Finland. Temperatures are quite high in Estonia at the moment, so the teams will need to consider how to manage their smaller allocation of the alternative hard compound, as limited by the regulations.”

Pirelli will bring around 1500 tyres to Estonia, of which 400 will be for the top class of World Rally Cars.

Pirelli will also supply 900 tyres to the other four-wheel drive cars in the event, including those entered in WRC 2 and WRC 3:

• Again, there is a separate allocation of four tyres for shakedown

The third round of the Junior WRC takes place in Estonia, for which Pirelli will supply a further 200 tyres:

85.98. Rally Estonia debuted in the WRC in 2020 with a short-format event starting on Friday evening and running until Sunday. This year it will be a four-day event, with 24 stages rather than 17 and an extra 85.98 competitive kilometres – forming a total of 319.38 km across the weekend.

Soft compound tyres are usually preferable on the smooth but sandy surfaces found on Rally Estonia. But with four or more stages in each loop, and high ambient temperatures anticipated during the rally, the longevity of the hard compound could also prove popular.

Alexey Lukyanuk. A two-time European champion with Pirelli, the Russian will be making his first appearance on the global stage for over four years with an entry into WRC 3 in Estonia. Both his car – a Skoda Fabia Rally2 evo – and his co-driver Yaroslav Fedorov will be new to him, but Lukyanuk is a previous outright winner of the rally having honed his skills on the fast roads of the Baltic region. His class rivals include Kajetan Kajetanowicz, a three-time former European champion with Pirelli who Lukyanuk defeated to win Rally Estonia in 2015.