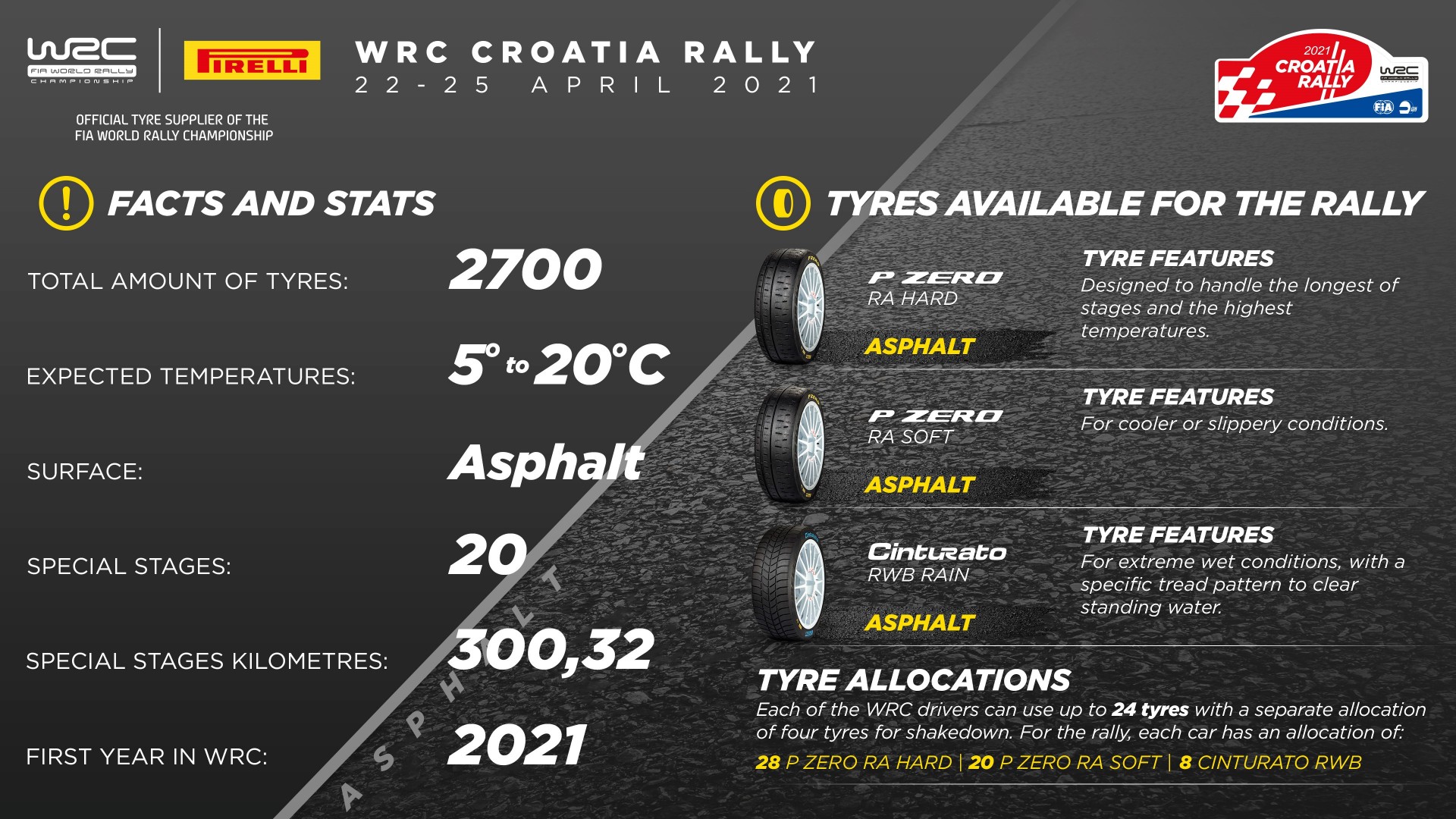 Milan, April 19, 2021 – For the FIA World Rally Championship’s first ever visit to Croatia, Pirelli will equip the drivers with its P Zero tyres on challenging and diverse asphalt roads close to the country’s capital city Zagreb. After the winter conditions of Rallye Monte-Carlo and Arctic Rally Finland, this will be the first pure asphalt event of the 2021 season, when Pirelli is returning as exclusive supplier to the WRC. For the first time this year, all the categories from RC1 to RC4 will be represented as a scoring round of the championship.

The Pirelli tyres in Croatia

P Zero RA: Pirelli’s asphalt rally tyre will be available in two different compounds in Croatia and other sealed-surface events. Making its debut will be the RAH hard compound tyre, designed to handle the longest of stages and the highest temperatures. The RAS soft compound, which already appeared on Rallye Monte-Carlo, is intended for cooler or slippery conditions.

Cinturato RWB: A dedicated rain tyre for extreme wet conditions on asphalt roads, with a specific tread pattern that is particularly effective at clearing standing water to reduce aquaplaning.

Terenzio Testoni, rally activity manager: “Asphalt testing has been a key part of our testing programme with the 2021 P Zero RA, so we’re confident of a strong performance as we head to our third different surface from three WRC rallies. Our latest asphalt product – in both soft and hard compound – also uses some of the lessons we have learned from other top levels of motorsport, including Formula 1. Croatia will of course be a new adventure for everybody, so it’s hard to know what to expect exactly: both in terms of the stages themselves, which will be quite varied, and the weather. However, the feedback from drivers during testing has been very positive, so we’re looking forward to the weekend. We can almost consider it to be another home round of the championship for us, as the distance in kilometres from our HQ to the rally base in Zagreb is actually slightly less than it is for Italy’s WRC round in Sardinia!”

Pirelli will bring around 2700 tyres to the Croatia Rally, of which roughly 700 will be for the top class of World Rally Cars.

Pirelli will also supply 1700 tyres to the other four-wheel drive cars in the event, including the 7 entries in WRC 2 and 15 entries in WRC 3. The Junior WRC, supplied by Pirelli since 2018, begins its 2021 season in Croatia with 8 promising young drivers behind the wheel of identical two-wheel drive Ford Fiesta Rally4 cars. They have a total of 300 tyres available.

The big number: 86. The last WRC round to be run entirely on asphalt tyres was Rallye Deutschland in August 2019, 86 weeks ago. Many of the leading drivers have limited experience of their current cars on dry asphalt.

Selecting the right tyres in Croatia will be made more difficult by the lack of knowledge of the event and by the many different types of road that are expected to feature: from smooth, fast and flowing, to abrasive, technical and narrow. The weather could well play a part as well.

Surface changes. According to the organiser, the rally will feature up to six different types of asphalt surface, all with varying grip levels. This adds to the demands on the tyres as well as for the drivers.

Sébastien Ogier: “From what I’ve seen on video so far, the roads in Croatia might be quite challenging, and maybe a bit dirty and narrow in places. So I’m sure there will be plenty of action ahead of us.”