Tim Gajser wins both races in the MXGP class and extends his lead in the championship standings, Jeffrey Herlings is still on top in MX2

The spectacular Matterley Basin circuit hosted the eleventh round of the 2016 FIM Motocross World Championship. The British track - located in a green ‘bowl’ setting near the town of Winchester – features medium/ hard soil that showcased the excellent performance of the SCORPION™ MX32™ and the tyres that allowed Pirelli their eleventh Grand Prix win in both classes and to continue their 100% record in 2016. Tim Gajser won again in the MXGP class by owning both motos. At Matterley Basin the Slovenian preferred the SCORPION™ MX32™ 120/90-19 on the rear that allowed him to manage the power of his CRF450R, while on the front he used - like all Pirelli’s riders - the SCORPION™ MX32™ 80 / 100-21. Thanks to his sixth victory of the season, Gajser has consolidated his lead in the championship with 74 points over the unfortunate Romain Febvre who missed the races on Sunday after a heavy crash on Saturday. The world champion will miss also the next Grand Prix of Lombardia at Mantova in Italy. An excellent second place was secured by Max Nagl who, unlike Gajser, opted for a SCORPION™ MX32™ 110/90-19 rear. It was an unlucky day for Antonio Cairoli; second in the first moto the Italian then suffered a sore wrist after a hard landing from the quad jump in the second race and finished sixth overall. Jeffrey Herlings was once again unbeatable in the MX2 class. The strong Dutch rider raced with Pirelli SCORPION™ MX32™ 110/90-19 rear and SCORPION™ MX32™ 80/100-21 front and won both motos to extend his advantage in the championship standings. Second place belonged to Dylan Ferrandis, equipped by the same Pirelli tyres as the winner, in front of Pauls Jonass. Several mistakes kept Jeremy Seewer off the podium and in fourth overall but the Swiss still defends second place in the championship. Saturday's Qualifying Heat winner Max Anstie grabbed fifth position at his home Grand Prix. Next weekend the riders will tackle the Grand Prix of Lombardia which will be hosted on the sandy "Tazio Nuvolari" circuit in Mantova, Italy. Race results: 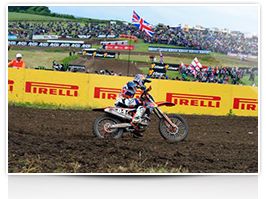 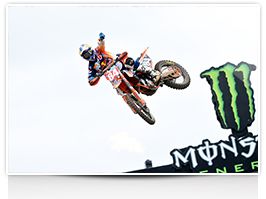