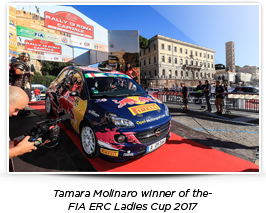 Tamara Molinaro claimed the ERC Ladies Trophy on home territory with one round to go, also taking the class victory on the event alongside co-driver Giovanni Bernacchini in their Opel Adam R2.

Italy’s Marco Pollara was another driver to wrap up his title around early, taking the Italian two-wheel drive championship with his co-driver Giuseppe Princiotto. The crew also confirmed their leadership of the Italian Junior Championship.

In a thrilling finale to the main event, Kajetan Kajetanowicz consolidated his advantage at the head of the ERC standings in his Pirelli-equipped Ford Fiesta R5 after finishing second overall to Bryan Bouffier in Rome by just three-tenths of a second. Kajetanowicz is now well on course to claim his third consecutive European title with Pirelli.

Similarly, Pirelli’s Paolo Andreucci maintains his leadership of the Italian Rally Championship in the Peugeot Italia 208 T16, after finishing third despite a gearbox problem that cost him time.