10 years for Pirelli as sole supplier of WSBK Championship 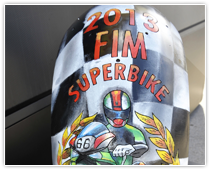 The Eni FIM Superbike World Championship ended in Jerez de la Frontera with Tom Sykes winning the rider’s title and Aprilia being awarded the manufacturers’ prize. Tom Sykes had already clinched the title after Race 1 and won both the prizes offered by Pirelli this year: the “Tattooed tyre of the Champion”, a chiseled racing slick painted with acrylic enamels depicting the World Champion sitting on his bike framed by a laurel wreath; and the “Best Lap Winner: fastest rider of the year” for achieving the highest number of fastest laps, 13. The final round at the Spanish circuit marked Pirelli’s tenth anniversary as sole supplier to all classes of the FIM Superbike World Championship, a unique record in the history of motorsport proving that, if properly applied, the sole supplier formula can satisfy both teams and riders without compromising tyre innovation and development. 2013 has indeed marked another important milestone in the motorcycle racing history, with the top class increasing from 16.5 to 17 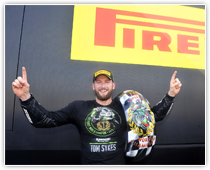 inch tyres. Pirelli engineers have completely redesigned tyres with new profiles and sidewalls, larger contact patch, improved stability and turn-in when cornering, whilst performance is maintained throughout the race. In addition, all races can be run with just two new front and rear compounds instead of the three previously available, since Pirelli has managed to considerably extend each compound’s range of use.

10 years for Pirelli as sole supplier of WSBK Championship
Newsroom