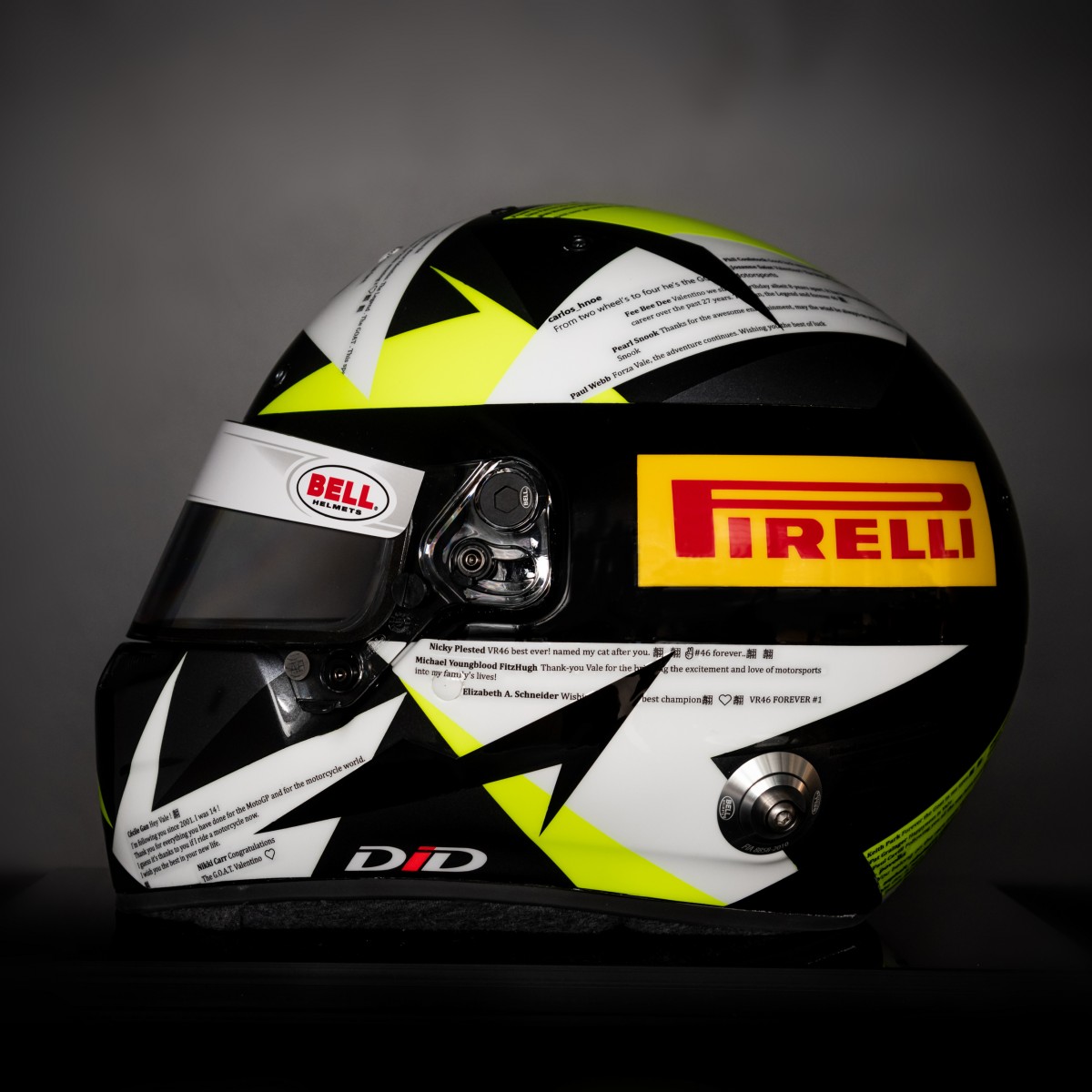 Pirelli Motorsport Director Mario Isola gave Rossi the helmet, made by Bell and decorated by Davide Degli Innocenti, during the recent GT World Challenge round at Misano.

Fans throughout the world sent messages via Pirelli’s social media to welcome bike legend Valentino Rossi to the GT World Challenge – exclusively supplied by Pirelli – telling of their unconditional support, love for motorsport, and gratitude for the extraordinary emotions that “The Doctor’ has inspired over the years. Still now, he continues to do so.

Pirelli’s campaign was launched as Rossi made his GT World Challenge debut at Imola in April, involving his worldwide community of fans in an incredible show of affection.

They responded in their thousands in less than two months on Pirelli’s social channels, with an avalanche of messages welcoming Rossi back to competitive action and wishing him the best of luck. The 50 most memorable messages, encapsulating exactly what Rossi means to people, became part of the celebratory helmet design, commissioned by Pirelli from famed Italian designer Davide Degli Innocenti in Riccione.

The Bell helmet was given to Rossi this week at Misano: the venue for the sixth round of the SRO-promoted GT World Challenge, which is also the second round to be held on Italian soil this year.

Presenting the helmet to the multiple bike champion, Pirelli’s Motorsport Director Mario Isola said: “Valentino is part of motorsport and Pirelli legend, so we wanted to give him a special welcome to the next chapter in his career. The GT round at Misano was exactly the right place to showcase the esteem in which he is held by fans all over the world.”

Among the most significant messages decorating his helmet were those that described not only what people felt about ‘The Doctor’, but also motorsport in general. Michel wrote, for example: “Thank you Valentino for bringing such passion and excitement for motorsport into the lives of my whole family.” Another fan, Steph, described “Sundays glued to my seat” watching Rossi’s exploits. Stanley recounted how “my daughter likes you so much, my grandson’s middle name is Valentino.” And then there’s Willie, who described Rossi as “a mentor for some, but an icon and a legend for all.” Not mention Fabio, who pointed out: “Valentino is a religion! Vale forever!”