Andreucci aims for another win with Pirelli

Following a straight run of wins in the first three rounds of the Italian Rally Championship, official Pirelli test driver Paolo Andreucci is aiming to make it four in a row on Rally Targa Florio from 3-4 June. 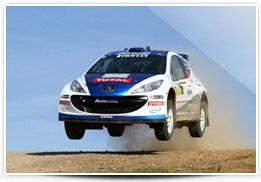 Andreucci, a five-time Italian champion, will once again compete in his Peugeot Italia 207 S2000, with which he won the series last year on Pirelli tyres.  Co-driven as always by Anna Andreussi, the 46-year-old Italian has triumphed on the Targa Florio five times – three of them with Pirelli – and he is confident that he can do it once again this weekend. The legendary Rally Targa Florio on the Italian island of Sicily is one of the oldest motorsport events in the world, celebrating its 95th running this year.  The world famous rally, which has lent its name to many road cars such as the iconic Porsche 911 Targa, is characterised by its mountainous asphalt roads that will challenge the tyres to the very limit.  Andreucci, who developed Pirelli’s highly successful tyres for the World Rally Championship from 2008-2010, is confident that the P Zero asphalt rubber will give him both the performance and durability required to challenge for victory once more on the 255-kilometre event. Andreucci commented: “I love the Targa Florio but it is a very intense sprint with lots of short stages, where there are some very strong local specialists. Grip is really important here as the surfaces are incredibly slippery and the speeds quite high: on the rare occasions that it rains, the roads become almost impossible. We’ll be using the P Zero RX7 tyres and maybe the harder RX5 for dry asphalt, depending on the conditions and temperatures. These are tyres that have given us a lot of grip in the past, helping us to make the difference and extend our winning record in Sicily. We’re going to test this week before the rally gets underway and hopefully we will have a few evolutions to try out as well.” Other top drivers competing with Pirelli on the Targa Florio include Alessandro Perico in a similar Peugeot 207 S2000, as well as last year’s Targa Florio winner Toto Riolo. In the two-wheel drive class, the leading Pirelli competitors are Citroen Italia DS3 R3T drivers Simone Campedelli and Andrea Crugnola. The rally also counts towards the Italian Renault Clio Trophy and the Mitsubishi Evolution Cup. The Targa Florio begins at 2000hrs on Thursday 2 June in the city of Palermo outside the Piazza Castelnuovo. The drivers then go on to complete SS1, a special stage of just 1.65 kilometres, before heading up to the mountains of Montemaggiore for the start of Friday’s action at 0815. The rally continues on Saturday and finishes at approximately 1630 in Palermo. Pirelli’s Motorsport Director Paul Hembery commented: “The Targa Florio is one of those names that has a real place in motorsport history, so we’re very proud to be represented so strongly on such a famous rally. Our tyres have been dominant in a huge variety of conditions on the Italian Championship so far, and I’ve got every confidence in the talent of our drivers to help us continue this success over the weekend.” For more information about Pirelli, please contact Anthony Peacock on +44 (0)7765 896 930 or anthony@mediatica.co.uk

Andreucci aims for another win with Pirelli
Newsroom