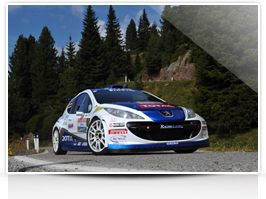 Peugeot Italia driver Paolo Andreucci will be aiming to extend his Italian Championship lead on the 11-stage Rally San Martino di Castrozza this weekend over the mountain roads of the Dolomites. Andreucci, who will be fighting for another victory to ensure that he remains on track for securing his sixth Italian rally title, said: “This is a really tough rally for a lot of reasons: we climb up high over 2000 metres on slippery mountain roads and the stages are quite short, so it’s a rally that is won and lost by seconds where you need instant performance from the driver, car and tyres. There’s also a big variation in temperatures: in the valley you can have maybe 20 degrees centigrade but up high in the mountains it could be just three or four degrees. Luckily we have a very good range of tyres from Pirelli that covers every eventuality, but we will need to think hard about making the right choices.” Stefano Albertini, the winner of the 2011 Italian Junior Rally Championship, will pilot a second Pirelli-supported Peugeot 207 S2000. The 25-year-old was awarded with a drive on four rounds of the Italian Rally Championship this year as a result of a new joint initiative between Pirelli and CSAI, the Italian motorsport federation. Several other crews will rely on Pirelli tyres at the demanding all-asphalt event including Alessandro Perico and Matteo Gamba as well as local man Fabrizio Ferrari, each driving a Peugeot 207 S2000. For the first time Rally San Martino also forms part of the Trofeo Rally Asfalto, which is currently led by Pirelli-equipped drivers Corrado Fontana and Paolo Porro. Pirelli will bring its RX5 tyre for longer and moderately abrasive stages (seen mostly on leg two) and the RX7 for short and smooth stages (seen mostly on leg one). The RX9 tyre will also be available for very cold and extremely slippery conditions. The weather forecast predicts temperatures between five and 20 degrees centigrade, so the base tyre on the event should be the very adaptable RX7. The RX family of tyres is among the most versatile in Pirelli’s competition range thanks to a lightly grooved tread pattern, a square profile and a particularly rigid structure. Conditions in the Trentino region this weekend are expected to be largely dry. Following a ceremonial start in the ski resort of Rosalpino on Thursday evening, Rally San Martino di Castrozza gets underway with seven stages at 0925 on Friday 14 September. On Saturday, the crews tackle four more stages, finishing the event at 1730 after a total of 156.86 competitive kilometres.