Pirelli driver Paolo Andreucci has claimed his eighth career drivers’ title and his seventh title together with Pirelli by winning the all-asphalt Rally Due Valli around Verona, the final round of this year’s Italian Rally Championship. 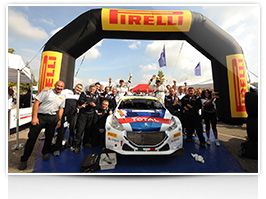 On the previous round, the Rally dell’Adriatico, Pirelli also claimed the manufacturers’ title, thanks to Peugeot Italia, and the Junior title thanks to Giacomo Scattolon. This completes a clean sweep of the Italian Rally Championship titles for Pirelli once more, against strong competition from rival tyre manufacturers. Andreucci, co-driven as always by Anna Andreussi, encountered a wide variety of different conditions on the Rally Due Valli, ranging from rain to fog to dry asphalt. He used Pirelli’s latest RX5C tyre for the dry asphalt conditions, and opted for the soft compound RE7A when it started raining, with its unique tread pattern designed to prevent aquaplaning. The Italian said: “I’m absolutely delighted: we won the rally and the championship, so it doesn’t get any better than this. It was a very hard rally during which we saw all sorts of conditions; it was a real mixture. But we were able to be fast in all of them, and that is thanks also to our Pirelli tyres, which were perfect. Whatever the conditions, I felt a lot of confidence. This is my seventh title together with Pirelli and it was one of the hardest ones of all to win. I’m so proud of the way that we brought our car from its world debut back in March all the way to this championship win. It’s all down to teamwork, in which the work we have done with Pirelli plays a very important part. A big ‘thank you’ to everyone.” Andreucci clinched the very first international driver’s title for the all-new Peugeot 208 T16 R5, which only competed in its first full season this year. He won four events: Targa Florio, San Marino, Friuli and Due Valli to underline his status as the most successful driver in Italy. Scattolon won the two opening rounds of the Junior championship at the Rally del Ciocco and Sanremo, to put him in firm contention for the title – which he eventually wrapped up with one round still to go in his privateer Peugeot 208 R2. Pirelli’s motorsport director Paul Hembery said: “Paolo’s fantastic achievement this year has underlined the quality of our rally tyres in all conditions – ranging from asphalt to gravel to rain to mud – against formidable opposition. He came into the final round of the championship under some pressure yet delivered impeccably and led from the front. We have carried out a lot of work on our rally product this year, having also returned to the World Rally Championship, and the results are clear to see. We’re delighted to celebrate this latest success together with Paolo, Anna and Peugeot Italia. Giacomo Scattolon has also used our tyres to great effect this year, marking himself out as a definite talent to watch in the future.”