Andreucci closes in on another italian title with Pirelli 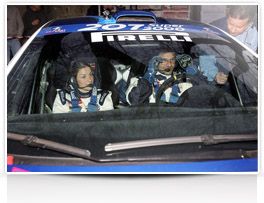 Paolo Andreucci has made it a remarkable five wins out of five events on the Italian Rally Championship, exclusively using Pirelli tyres. Andreucci’s latest victory on the Rally del Salento means that his Peugeot Italy team is now just one point away from clinching a second consecutive manufacturers’ title with Pirelli with three rounds still left to go. Using Pirelli’s PZero RX asphalt tyres, Andreucci overcame the many hazards of the all-asphalt event in the south of Italy to win by 19.1 seconds. The Italian, who is also Pirelli’s official test driver, won the first two stages at the La Conca karting circuit before taking the lead again with three stages to go. Completing a clean sweep of the top results for Pirelli was a Group N win for Maurizio Angrisani in a Mitsubishi Lancer thanks to seventh overall. Just behind him was the top Junior competitor: the Citroen Italia DS3 R3 of Simone Campedelli in eighth, which was also supplied by Pirelli, claiming his fourth consecutive podium in the category. Ivan Ferrarotti won the Pirelli-backed Renault Clio R3 Trophy, underlining the performance of the Italian tyres on an extremely wide variety of machinery. Once again the 45th Rally del Salento was hot and challenging, with 150 kilometres of slippery stages flanked by stone walls that can frequently catch out even the most talented drivers. The ability of the Pirelli tyres to guarantee efficient traction and braking on even the most slippery stages made the difference, allowing Andreucci to extend his championship margin. Andreucci, who now has a 62-point lead over his closest competitor, commented: “Winning again here is obviously a great joy for myself and my co-driver Anna Andreussi. With the advantage that we had coming into the rally, we didn’t have to go flat-out from the very beginning, but when we saw that we had the chance to win the rally we were able to push hard and benefit from the capabilities of the tyres, which performed perfectly over this very demanding route. The nature of the roads on this event means that punctures are always a risk, but we had no problems whatsoever.” Pirelli’s motorsport director Paul Hembery added: “Congratulations to Paolo and Anna for another win that extends their monumental run of success on our tyres. Salento was one of the most complex rounds of the championship that really tests every aspect of a tyre’s performance, so this victory is very significant. Not only that, but our strong showing in all the classes underlines the efficiency and durability of Pirelli tyres on an ample range of different cars.” The Italian Rally Championship now switches to gravel for the Rally San Crispino from 14-16 July, using Tuscan stages that were previously a highlight of Italy’s round of the World Rally Championship in the 1990s. For more information about Pirelli, please contact Anthony Peacock on +44 (0)7765 896 930 or anthony@mediatica.co.uk

Andreucci closes in on another italian title with Pirelli
Newsroom