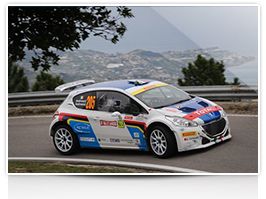 Paolo Andreucci will chase a record-extending eighth Rally Targa Florio victory when he competes in Sicily this week (May 8-10) in his Pirelli P Zero-shod Peugeot Italia 208T16. The multiple Italian champion, affectionately known as Il Re del Targa – the King of the Targa – because of his outstanding success on the Tarmac event, will be among the favourites for a first-place finish on round three of the Italian Rally Championship. The event is based in Campofelice di Roccella west of the Sicilian capital Palermo. It consists of 16 all-asphalt stages over a competitive distance of 162.25 kilometres on Friday and Saturday.
Pirelli drivers in Sicily Pirelli’s factory team – Peugeot Italia – enters a new-generation 208 T16R5 for Paolo Andreucci/Anna Andreussi, plus the R2 version of the car for Stefano Albertini/Silvia Mazzetti.
In addition to these crews, the leading Pirelli runners on Rally Targa Florio include:
Alessandro Perico/Giovanni Lo Neri (Peugeot 207 S2000) Andrea Nucita/Giuseppe Princiotto (Peugeot 207 S2000) Marco Runfola/Marco Pollicino (Peugeot 207 S2000)
The tyres available Pirelli will supply its RX7B P Zero tyre, which is designed for use on low-grip asphalt, which is common in Sicily. In the event of wet conditions, Pirelli will provide its RX9 tyre.
For the historic section of the event, Pirelli will equip its runners, including the Lancia -037 of European champion Massimo Pedretti, with the P7 Corsa Classic.
Quotes Paolo Andreucci, Peugeot Italia driver: “This will be the first time we will use the new R5 car on the Targa Florio so it’s important we find the right set-up as quickly as possible. The stages are faster and bumpier compared to what we experienced on Rallye Sanremo but these are still in the true spirit of what a rally should be. The stages also go through towns and villages so there are lots of fans watching the action. I have every confidence that my Pirelli tyres will provide the performance and durability I need.”
Terenzio Testoni, Pirelli product sale manager: “The Targa Florio is a legendary event where Pirelli has enjoyed considerable success. However it’s not an easy rally by any means. The high-speed stages require a precise car set-up and a tyre that not only provides a high level of performance on a low-grip surface but works effectively in temperatures ranging from 10 to 25 degrees centigrade. The Pirelli P Zero range we’re bringing to Sicily will more than meet the demands placed upon it.”
Ends For more information about Pirelli, please contact Anthony Peacock on +44 7765 896 930 or anthony@mediaticaworld.com