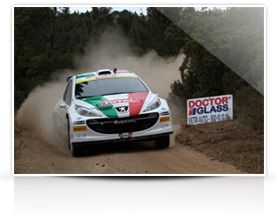 Pirelli driver Paolo Andreucci won the legendary Costa Smeralda Rally – round four of the Italian Rally Championship – convincingly last weekend, on his return to the Peugeot 207 S2000 with which he clinched four Italian titles between 2009 and 2012. Normally he drives a Peugeot 208 R2, which will be replaced by a new R5 model later this season, but Costa Smeralda marked a special occasion. The event was held on the same stages as the World Rally Championship round in Sardinia, mirroring the WRC route throughout Saturday and some of Friday. Taking the times of the WRC competitors as a base, on the stages that they contested together, Andreucci’s Pirelli-equipped Peugeot 207 S2000 would have finished seventh overall: ahead of a number of World Rally Cars. Andreucci’s Peugeot did not suffer a single puncture throughout the notoriously punishing route, which became even tougher on the second run through the stages, when surface gravel was swept loose to reveal a hard base. On top of that, the tyres had to deal with sharp rocks – which caused punctures for many of the WRC runners not equipped by Pirelli – and temperatures in excess of 30 degrees centigrade. Italian Rally Championship leader Umberto Scandola, also running on Pirelli tyres, was second in his Skoda Fabia S2000, 52 seconds behind Andreucci. Just like the multiple champion, he too did not pick up a single puncture throughout the event. Walter Pierangioli finished third in a Group N Mitsubishi Lancer, completing an all-Pirelli podium. Pierangioli also won the Trofeo Rally Terra classification. The strength of Pirelli’s tyres in these extreme conditions – which are among the roughest in Europe – underlined the durability shown when Pirelli was sole supplier to the World Rally Championship from 2008 to 2010, resulting in a failure rate that was less than 0.02% throughout the three years. Andreucci, who won all the stages apart from one to cement his third place in the championship, commented: “This one-off return with the Peugeot 207 S2000 was an enormous pleasure: the car, the team and the tyres were exceptional from start to finish. As usual, these were extremely challenging conditions, but we didn’t experience the slightest problem with the tyres, which gave us the reliability as well as the performance we needed to win, after many months out of the 207.” The Pirelli drivers mainly used the Scorpion K4 gravel tyres in Sardinia. The harder compound K2 tyres were also available for even more extreme conditions. Pirelli’s product manager Terenzio Testoni commented: “The puncture-free performance of both Paolo and Umberto on the toughest and hottest gravel stages we drive on all year, demonstrate not only their talent but also the quality of our tyres, which are available to all customers. Paolo showed exactly why he is such a successful champion, and it’s fascinating to compare his times with those of the world championship competitors in their World Rally Cars. Even in a Super 2000 car, the combination of Paolo, Pirelli and Peugeot would have been enough to finish in the top eight overall, while he would have won the Super 2000 category with an advantage of more than two minutes.” The Costa Smeralda Rally took place over six stages on Friday and Saturday, comprising a total of 129.04 competitive kilometres. Former winners of the prestigious Italian event include Markku Alen, Attilio Bettega, Henri Toivonen, Juha Kankkunen and Didier Auriol. For more information about Pirelli please contact Anthony Peacock on +44 7765 896 930 or anthony@mediaticaworld.com