Pirelli driver Paolo Andreucci has claimed victory on the fifth round of the Italian Rally Championship in San Marino. Andreucci used Pirelli's proven K and XR gravel tyres to claim victory on the event in his Peugeot Italia 208 T16 R5. After 12 challenging stages, including 17 kilometres of asphalt using gravel tyres, Andreucci won by just three seconds, clinching the very first gravel victory for the all-new car in Italy. Peugeot Italia now consolidates the lead of the manufacturers’ championship, which it has dominated in recent years with Pirelli. 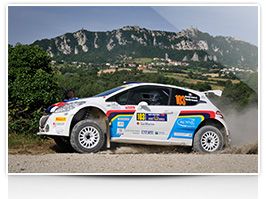 Andreucci, who has also won most of his titles with Pirelli said: “This was a very tough, rally for the car, the team, and, of course, the tyres. In the end it was a really close battle. We made some changes to the car set-up close to the finish and that helped us to make up the difference we needed to win. This is an important victory, and I would really like to thank Pirelli for the valuable contribution. Once again we had an excellent product that we could rely on to give us something extra.” Rally San Marino featured slow to medium speed gravel roads, run in hot temperatures, which made maintaining consistent tyre performance all the more challenging. Both the XR and the K tyres used by Pirelli performed perfectly, with the XR giving its best on cleaner roads – thanks to a closed tread pattern and rounded shoulder that present a bigger contact patch with the ground, leading to better performance and increased durability. For the stages with loose gravel, Andreucci and the other Pirelli runners used the K tyre, which is extremely efficient at evacuating loose stones and dirt. All these characteristics in combination helped to make a difference, as well as perfect reliability ensuring that there were no punctures for the Pirelli runners. Up-and-coming Finn Mikko Pajunen also triumphed in the Renault R3 Trophy, also winning the Production category on Pirelli tyres. Pirelli product manager Terenzio Testoni said: “It’s been another highly successful weekend on the Italian Rally Championship for Pirelli, with our products outperforming all their rivals. The results are wins in every class, on one of the most demanding events held in Italy. The XR tyre, which provided extra speed on the second run through the stages, was one of the fundamental contributions to Andreucci’s victory, helping him to find an edge when it mattered most.” The next round of the Italian Rally Championship will be the Rally del Friuli on 31 August.

For more information about Pirelli, please contact Anthony Peacock on +44 (0)7765 896 930 or anthony@mediaticaworld.com