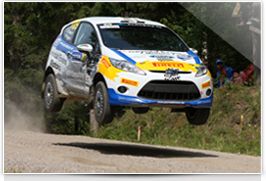 The WRC Academy will face a new challenge later this week when crews contest the first all-asphalt round of the Pirelli-backed series, ADAC Rallye Deutschland. Rallye Deutschland is as an event that requires high levels of concentration from drivers at all times due to its technical and slippery sealed-surface roads. Based in the historic city of Trier, south-west Germany, the rally uses stages in the Mosel Valley, the woodland areas of Saarland and the Baumholder military training area where giant boulders, known as hinkelsteins, line the route. It is a rally that favours the brave and will push the WRC Academy crews to the limit. The fourth round of this year’s WRC Academy will challenge 10 young drivers over 12 special stages and Pirelli will be on hand to supply the crews with its highly competitive RX5 and RE7 asphalt tyres. The RX family of tyres is among the most versatile in Pirelli’s competition range thanks to a lightly grooved tread pattern, a square profile and a particularly rigid structure. These characteristics help steering precision and provide a rapid response, while maintaining the strength and durability to cope with prolonged high speeds and longer stages. The RX5 will be used in dry conditions with the RE7 available in the event of cold and damp conditions. Following a superb start to the season including two back-to-back victories, former Pirelli Star Driver Elfyn Evans is currently leading the six-round WRC Academy. The 23-year-old Welshman leads the championship by 18 points and will be looking to make it a hat-trick in Germany. He will also be feeling buoyed by his recent second-place finish on International Rally Nothern Ireland, round five of the Pirelli-supported British Rally Championship. Proving the success of the prestigious Pirelli Star Driver programme, former Pirelli-backed driver Brendan Reeves is second in the standings. The 23-year-old Australian had a strong first half to the season and was the only driver to claim three podium finishes. Only three points behind Reeves is Briton Alastair Fisher who took the spoils on the championship’s opening round in Portugal. Sweden’s Pontus Tidemand is currently fourth in the standings, seven points clear of Spaniard Jose Suarez who rounds off the top five. Pirelli’s Motorsport Director Paul Hembery commented: “On the back of three all-gravel rallies, we're looking forward to seeing how the WRC Academy crews will fare on asphalt later this week. Germany is one of the most technical events on the WRC Academy calendar this year and competitors will have to ensure their pacenotes are spot on in order to leave with a strong result. There is a strong chance that it will rain during the course of the rally but temperatures are still expected to be warm, making tyre choice critical. The Pirelli RX5 and RE7 range is well-equipped to withstand the variable weather conditions and it will be interesting to see how the crews adapt to the challenges of driving on the many different surfaces that are typical of Germany.” ENDS For more information about Pirelli, please contact Anthony Peacock on +44 7765 896 930 or anthony@mediatica.co.uk