The Audi R8 LMS of Belgian Audi Club Team WRT drivers Marcel Fassler, Will Stevens and Dries Vanthoor was fastest in the pre-qualifying session ahead of the Blancpain GT Series finale at the Circuit de Barcelona-Catalunya.

After a warm and sunny start to the event, rain began to fall just before pre-qualifying got underway, bringing the Cinturato WH rain tyre into action. With conditions worsening it was crucial to set a good time early in the session, when Vanthoor posted a 1m58.369s. 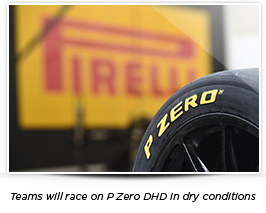 The Herberth Motorsport Porsche 991 GT3 R was only 0.061 seconds behind in second place thanks to Robert Renauer, and Felix Serralles was third in one of the AKKA ASP Mercedes-AMG GT3s. The same team occupied the top three places in the dry free practice session this morning.

Two other championships are in action on Pirelli tyres at Barcelona. In the Blancpain GT Sports Car Club, Anthony Pons claimed victory in the qualifying race in his Mercedes-AMG GT3. In the GT4 European Series Southern Cup, the new BMW M4 GT4 won the opening race of the weekend in the hands of Beitske Visser and Dennis Marschall. 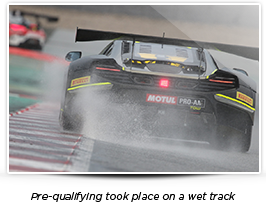 Quotes:
Matteo Braga (Pirelli circuit activity manager): “It has not been a very representative day, because we had one practice session in dry conditions where the teams were using tyres carried over from previous rounds, and then the pre-qualifying was held in wet conditions. So it was not ideal preparation for the endurance race but it may be useful for qualifying tomorrow morning, where the forecast is still for a chance of rain.”

Dries Vanthoor (Belgian Audi Club Team WRT, #5 Audi R8 LMS): “It was tricky conditions at the start of pre-qualifying. We were on the rain tyre and the first sector was not as damp as the last sector, but it felt really good on my fastest lap. The track was slippery so we had to watch out. It’s difficult to learn much from this session but at least it seems like we’re going well in the rain as well.” 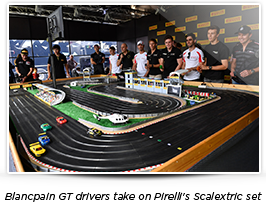 Fact of the day: More than 20 of the Blancpain GT Series drivers began the weekend’s competition early when they took on the Scalextric course at the Pirelli activation area in the paddock this afternoon. The drivers raced against each other with the aim of posting the fastest lap: the winner will be announced on Sunday.

Number of the day: 111. The number of cars competing on Pirelli tyres at Barcelona this weekend across the Blancpain GT Series Endurance Cup, Blancpain GT Sports Club and GT4 European Series Southern Cup.