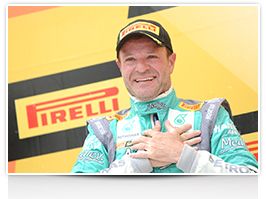 Rubens Barrichello, the most experienced driver in Formula One history, has won this year’s Brazilian Stock Car Championship: one of the most prominent motorsport series in South America, which has been exclusively supplied by Pirelli since 2013. The cars use silhouette bodies to resemble production models on tubular chassis, matched to V8 engines. The tyres used are Pirelli’s racing slicks and wets, similar to those used in GT racing, and there are compulsory pit stops to introduce an element of strategy. Grids of more than 30 cars are common, with 15 different drivers winning races this season. Barrichello switched to the Brazilian stock car championship when his Formula One career finished at the end of 2011, having racked up an astonishing 322 grands prix – a record – with six teams, including six seasons spent with Ferrari. He won 11 times in total, finishing second in the championship on two occasions (2002 and 2004). After taking pole position, Barrichello led the final round of this year’s Brazilian Stock Car Championship at Curitiba, but dropped to fourth after a small spin on the opening lap. Nonetheless, he battled to third, which was enough to secure him the title. Pirelli motorsport director Paul Hembery said: “Rubens did a fantastic job in one of the most competitive and prominent race series out there, which showcases our high-performance tyres to a truly enthusiastic audience. Brazil is a key market for Pirelli, and this latest victory underlines the prominence of our products.”

For more information about Pirelli, please contact Anthony Peacock on +44 7765 896 930
or anthony@mediaticaworld.com