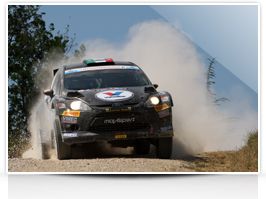 Giandomenico Basso has won the prestigious Rally San Marino, the seventh round of the Intercontinental Rally Challenge, using a Pirelli gravel tyre freely available to rally drivers and teams throughout the world. Driving a Ford Fiesta Regional Rally Car, Basso triumphed by 2.8s following two days of frenetic action in and around the Europe’s oldest sovereign state. It was the double European champion’s first gravel event in two years and the first time he’d driven his Fiesta on a loose-surface rally on the back of a 40-kilometre test. With all but one stage on gravel, tyre durability and performance were crucial to the outcome of the rally, particularly when ambient temperatures rocketed to 35 degrees centigrade and ground temperatures peaked at 50 degrees centigrade. The San Marino stages were smoother and more forgiving than those on other gravel-based events. However, the surface was slippery during the first pass but increasingly more punishing when the stages were repeated, sometimes twice. And with many of the stages featuring significant undulation and steep climbs from tight corners, the tyres were subjected to a stringent test, particularly by Basso’s turbocharged car throughout the 190 kilometres of competitive action. Basso used Pirelli’s K4 Scorpion tyre on the first pass through the stages to disperse the loose gravel before switching to the company’s XR5 Scorpion option when the stages were repeated, due to their ability to deal with the more aggressive surface and intense heat. Basso reported no significant tyre wear and following the finish in San Marino’s historic quarter on Saturday evening, he paid tribute to the work of the Pirelli technicians onsite and in Milan. “This is a fantastic result for me and while the team did a great job with the car, this victory would not have been possible without Pirelli,” said Basso. “Tyres were a crucial element of this event but throughout the rally I was able to take advantage of Pirelli’s expert tyre technology, which is available to competitors all around the world.” Terenzio Testoni, Pirelli’s product manager, said: “The Pirelli tyres used by Giandomenico, who put in a superlative performance after not competing on gravel for two years, are tried and trusted products that anybody can buy from a dealer. The combination of K4 Scorpion and XR5 Scorpion works very well on a demanding gravel event such as San Marino, with a high rate of attrition and an aggressive surface, highlighting both the performance and durability of our products. We would like to thank the A Style team, a completely private team, who still managed to field a fast and reliable car that was good enough to fight for victory from the start.” Basso’s success earned him the prestigious Colin McRae IRC Flat Out Trophy, which goes to the driver whose performance best embodies the spirit of the rallying legend on each round of the IRC. A panel of judges including Colin’s father Jimmy McRae and IRC general manager Jean-Pierre Nicolas chose the winner. Colin McRae used Pirelli tyres to win his world rally title in 1995. Completing Pirelli’s triumph in San Marino was the two-wheel drive victory for Britain’s Harry Hunt in a Citroen DS3 R3T and a Group N win for Mitsubishi Lancer driver Gabriele Noberasco. In the historic section of the event, former World Rally Championship star Piero Liatti led home a trio of Pirelli-equipped Lancia 037s. Basso, Hunt, Noberasco and Liatti were driving four completely different types of car – but the winning result was the same for the Pirelli runners.