Battle for GP2 title intensifies as series moves to Singapore 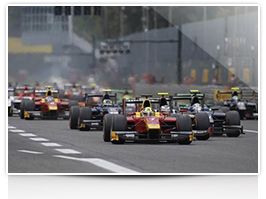 The GP2 series will travel to Singapore this week as the competitive Formula One feeder series gears up for the penultimate race of the season at the Marina Bay street circuit. With five drivers still in contention for this year’s GP2 title, this weekend could prove instrumental in defining the overall 2013 champion. For GP2, Pirelli has nominated the P Zero Yellow soft compound and the P Zero Red supersoft compound. While overall tyre wear is generally low in Singapore, there is a high level of thermal degradation due to the high ambient temperatures. Drivers can also experience extremely high levels of humidity on the Marina Bay circuit, testing both man and machine. Famed as Formula One’s only night race, this weekend will mark just the second time that the GP2 series has visited Singapore. Featuring 23 corners, Marina Bay has the second-highest number of corners of the year, but as only two of these are taken at high speed this means that less lateral energy is put through the tyres compared to other twisty circuits.

Pirelli’s racing manager, Mario Isola, said: “There is always a fantastic buzz in Singapore and it’s easy to understand why it is sometimes referred to as the ‘Monaco of Asia’: there are definitely some similarities between the two circuits. With only six points separating GP2 frontrunners Fabio Leimer and Sam Bird, as well as three other drivers still in with a mathematical chance of winning this year’s title, the scene is set for an extremely competitive race. With the GP2 drivers using the two softest compounds in our range, this should also allow them to extract the maximum possible performance from their cars. Of course, it will still be essential for the drivers to look after their tyres, and strategy will undoubtedly come into play as Singapore has one of the longest pit stop times of the year. Overtaking can also be difficult on this circuit, so extra importance will be placed on qualifying. The supersoft, with its rapid warm-up time, will be quicker over one lap but the soft tyre often has the advantage over a full race so the drivers will have to think about the correct tactics.” Each car will have five sets of dry tyres and three sets of wet weather tyres available for Singapore. The five sets of dry tyres comprise three sets of the harder compound (soft) and two sets of the softer compound (supersoft). The drivers can use their tyre allocation in any way they like. One set of the harder compound must be returned after free practice. Race One on Saturday is run over 170 kilometres or one hour and each driver must complete one compulsory pit stop during which a minimum of two tyres are changed. The grid for Race Two on Sunday is determined by the finishing order of the first race, with the top eight positions reversed. Race Two is run over 120 kilometres or 45 minutes, with no compulsory pit stops. In 2012, Max Chilton – who moved up to compete in Formula One this year with Marussia – and Giedo van der Garde, who now drives for the Caterham team, were the GP2 winners in Singapore when it was last season’s finale.