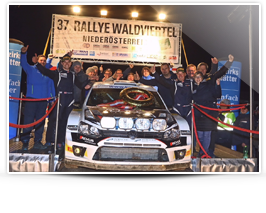 With victory on Rally Waldviertel, Raimund Baumschlager has become champion of Austria for the 14th time: an extraordinary record for this long-time Pirelli driver.

Both a driver and team owner, Baumschlager enjoys the Volkswagen Group’s highest confidence, and crowned his first season driving the Volkswagen Polo WRC in the best possible way alongside his German co-driver Pirmin Winklhofer.

Rally Waldviertel was the final decisive act of a superb season-long duel between Baumschlager and Hermann Neubauer.

Baumschlager came into the event only two points behind his rival and although he led most of the rally, he found himself starting the last stage with a deficit of eight tenths of a second to his opponent. On the final test, Baumschlager completed his latest masterpiece with the support of the Pirelli Scorpion K8, winning the stage, the rally and the championship.

Also a champion in sporting longevity (he will turn 58 years old in a few days), Baumschlager won his first national title in 1993. After several years in international championships (winning six European championship rallies) he returned to the Austrian series by regaining the title in 2003, beginning an almost-uninterrupted winning streak (beaten only in 2011 and 2016), first with the Mitsubishi Lancer and then with the Skoda Fabia S2000 and R5, before he switched at the start of 2017 to the VW Polo WRC that had achieved four world titles.

For further information about Pirelli, please contact Anthony Peacock on anthony@mediaticaworld.com or +44 7765 896 930