A truly remarkable day of racing at the opening round of the FIM Superbike World Championship season saw two former World Champions win races, four manufacturers propel their machines onto the podium and the 4.445km Australian circuit provide some classic moments for the 64,500 strong weekend crowd as the championship begins its 25th Anniversary celebrations in earnest. 2010 champion Max Biaggi Max Biaggi (Aprilia Racing) and 2011 title winner Carlos Checa (Althea Racing Ducati) were the two dominant figures in each 22-lap race, but each had dramatic moments in the other races, one more costly than the other. Biaggi leaves as the points leader after fighting back from last in race two to second place, finding himself five points shy of perfection on the opening weekend. Despite some troubled times in recent testing Marco Melandri (BMW Motorrad Motorsport) punched above his pre-race weight to jump onto the podium in race one, while pole winner Tom Sykes carried on his strong testing and qualifying form with a podium place in race two. Sylvain Guintoli (Team Effenbert Liberty Racing) put his 2011 Phillip Island nightmare raceday behind him with a particularly sweet third in the opener, finishing right on Melandri’s tail. 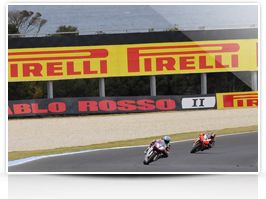 In the championship standings, Melandri is 15 points behind Biaggi’s total of 45, and one point ahead of Sykes, who has 29 points. Checa is fourth with 25 points. "The track at Phillip Island, as we know, has always been a very demanding circuit for tyres as they are subjected to heavy and constant thermal-mechanical stress, especially on the left side because of the track layout. On top of this, add asphalt from 1998 which, being so old, provides very little grip (which is why it will be resurfaced at the end of the year) and, above all, very high air and asphalt temperatures. Just think that on Saturday the air temperature reached 36-37 Celsius while the asphalt rose to 62. The tyres, which on most tracks usually operate at temperatures around 115-120 Celsius, reached 140-150 in this first race of the 2012 World Superbike Championship (measured with a pyrometer at a depth of 3 mm from the tread surface). Having made that statement which was necessary to fully comprehend the conditions in which the competition was held, we are satisfied with the way the weekend went. The tyres performed well, allowing all the riders to finish the scheduled race laps. The solutions we brought for SBK with a larger profile of 196.5 on the rear, in favour of a larger contact area to limit excessive wear on the left side, were very popular with the riders both in the SC0 soft compound and SC1 medium compound solutions, so much that no one opted for the classic 190 solution. The effectiveness of the solutions we brought here and their adaptability to the various teams' bikes was clearly demonstrated in race 2, where riders from four different teams took the first four places. Congratulations in particular to Max Biaggi and Carlos Checa who will no doubt provide us with great entertainment again this year, along with all the other contenders for the world title."- Giorgio Barbier, Racing Director, Pirelli Motorcycle 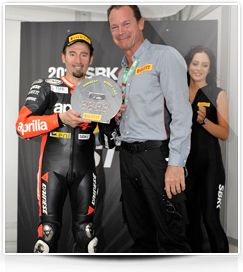 Pirelli BEST LAP Awards: SBK Race 1 – Max Biaggi (Aprilia Racing Team), 1' 31.785  (Lap  4) SBK Race 2 – Carlos Checa (Althea Racing), 1’ 32.846  (Lap  6) WSS –  Fabien Foret (Kawasaki Intermoto Step), 1’ 35.274 (Lap 2) Race 1 Biaggi won the first encounter by seven seconds from Melandri and third was a closely following Sylvian Guintoli after a dramatic contest on many levels. Checa crashed out of the race while leading, suffering a fast high-side fall on the final corner early in the race. He was uninjured but bruised and took no points. Spots of rain appeared on the riders’ visors and TV camera lenses at two separate stages of the race but to no real effect for the majority of the riders and it continued as a dry race. Sykes took fourth place after leading early on, with Jakub Smrz fifth on his Liberty Racing Team Effenbert Ducati. Michel Fabrizio (BMW Motorrad Italia GoldBet) was sixth, from a fading Jonathan Rea (Honda World Superbike Team). Biaggi set a new lap record of 1 minute 31.785 seconds, finally beating Troy Corser’s previous raceday best, which was set way back in 2007. Max Biaggi: “It was a very nice race, at the start with Carlos battling for the lead. Then suddenly he high-sided. When I was behind him a big stone hit my windscreen and then it started to do a little shower in one corner. So I had to stayed focused towards the end and with three laps to go my front tyre was sliding. But it’s a great result, it’s a new team with new people, my motivation is very high, the team did a great job.” Marco Melandri: “I’m so happy with the result and happy to give BMW their best result. I didn’t think it was possible before the race. I knew we were struggling more in practice than in the race but I have never made a long-run so far in the season so I wasn’t sure. The team have been working awesome and in the race the rear tyre did a really good job.” Sylvain Guintoli: “I didn’t even think about what happened to me last year here. In the race I knew I had the bike set-up to get a podium. I sort of stepped back a bit in the early part to save the tyres then when I saw Tom was slowing down I thought now’s the time to push hard. He was very hard to overtake. In the last two laps I was sliding all over the place but I really enjoyed that race.” Race 2 Checa recovered from his big race one crash to post his first win of the year but arguably an even greater performance came from second place man Biaggi. Checa hit the front early on but Biaggi had run off track on lap one, kept his bike upright and rejoined last. He then fought through to take a second place and a clear championship lead. Sykes overhauled a slowing Rea in a breathtaking final lap to get his first dry weather Kawasaki podium, after Rea’s tyres had been used up. Race two was held in track conditions twelve degrees hotter than race one. The injured Leon Haslam (BMW Motorrad Motorsport) put in a gritty ride to secure fifth place while his team-mate Melandri was one place behind. Carlos Checa: “I’m really satisfied, even more so after the crash in race 1. I’m OK now after winning, I think it’s the best anti-inflammatory I can take today! The team worked hard many days in Australia preparing for the race and to leave this country and track with a crash was not the best result. It wasn’t easy in race 2, I was pushing hard but I did not know where Biaggi was and I knew he had a strong pace to catch me. Shame about the crash but we are happy here to be winning!”