Biaggi asserts his authority at penultimate round

Max Biaggi (Aprilia Racing Team) scored a single podium for third place in race two at the eni FIM Superbike World Championship round in Portugal today, but two strong points scores saw him extend his overall lead as his other championship rivals found trouble. Eugene Laverty (Aprilia Racing Team) won his first race of the 2012 season in the second outing today, which went to all 22-laps duration. Tom Sykes (Kawasaki Racing Team) started well, as he won the first race in front of 51,000 weekend spectators, but he had to retire with an engine failure in the second race. With Marco Melandri (BMW Motorrad Motorsport) injured in the aborted first race, the Italian scored no points today. 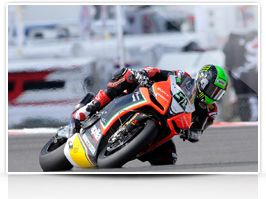 The final result from Portugal, with one round and two individual races to go in France in two weeks’ time, is that Biaggi has a total of 347 points, 30.5 more than Sykes, while Melandri is 38.5 points adrift of Biaggi. Official Tyre Supplier "Before analysing the Superbike races, Pirelli would like to congratulate Kenan Sofuoglu (on his return to the category) and team Kawasaki Lorenzini on their victory in the World Supersport Championship which rewards the rider’s excellent performance and the team’s consistent work throughout the season. But the Portimão round, the penultimate of the World Championship, was first and foremost an extremely important weekend in the Superbike class main feature which, despite the uncertain weather conditions, provided fans with two very heated and exciting races. In particular race1 was ridden on rain tyres by all the riders for both the first start, when the track was actually still quite wet, and for the restart after the race was red flagged to clean up oil left on the track by Brignola’s unfortunate crash. For the latter case, in spite of the track being almost completely dry and therefore not in ideal performance conditions for the wet solution, the tyres performed superbly and surpassed all expectations, allowing the riders not only to finish the race without problems but even to improve lap times as the race went on. Clear evidence of this is the best lap, realised by Carlos Checa (Althea Racing) during the last lap, at a time when the track had already quite completely dried off. Race2, on the other hand, was run on slicks. More specifically, almost all the riders opted for the oversized profile SC0 R874 solution which proved to be a valid alternative to the SC0 solution which was the standard selection here, as well as at Brno, Misano and Phillip Island. With a 30.5 advantage over the closest contender (Tom Sykes) and 38.5 over Marco Melandri, Max Biaggi has staked a strong claim on the title, but on several occasions Superbike has demonstrated just how unpredictable the races can be, so we will have to wait and see what happens during the final round which will be held at Magny-Cours in two weeks." - Giorgio Barbier, Racing Director Pirelli Moto Pirelli BEST LAP Awards: SBK Race 1 – Carlos Checa (Althea Racing), 1'56.477 (Lap 16) SBK Race 2 – Eugene Laverty (Aprilia Racing Team), 1'44.578 (Lap 5) Total BEST LAP (SBK): Checa C. (Althea Racing): 8, Biaggi M. (Aprilia Racing Team): 5; Melandri M. (BMW Motorrad Motorsport): 4; Sykes T. (Kawasaki Racing Team): 3; Guintoli S. (Team Effenbert Liberty Racing): 1; Baz L. (Kawasaki Racing Team): 1; Ayrton Badovini (BMW Mottorad Italia Goldbet): 1; Leon Haslam (BMW Motorrad Motorsport): 1; Laverty E. (Aprilia Racing Team): 1 WSS – Jules Cluzel (PTR Honda), 1'47.416 (Lap 6) Total BEST LAP (WSS): Lowes S. (Bogdanka PTR Honda): 3; Cluzel J. (PTR Honda): 3; Foret F. (Kawasaki Intermoto Step): 2; Parkes B. (Ten Kate Racing Products): 2; Lanzi L. (Prorace): 1; Morais S. (Kawasaki Lorenzini): 1 STK1000 – Jeremy Guarnoni (MRS), 1’47.031 (Lap 6) STK600 – Michael VD Mark (EAB Ten Kate Junior Team), 1'49.028 (Lap 7) 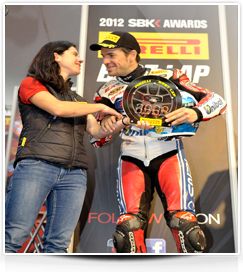 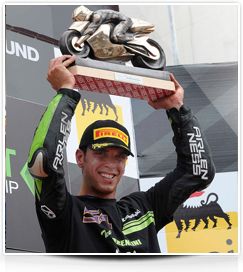 Race 1 Full wet conditions arrived on Sunday morning and they were to play a part in the race being halted because of an oil spill after a crash. A restarted race, over only 16 laps, was won by Sykes who scored his third win of the season and drew himself – temporarily - closer to championship leader Biaggi as a result. Max was fourth in the opening race after several incidents and changing fortunes as the race unfolded. Carlos Checa (Althea Racing Ducati) looked like he could pass Sykes at the end but was unable to in the final two laps, and he settled for second place. PATA Racing Ducati privateer rider Sylvain Guintoli scored himself another podium finish, in third place. A collision on lap one of the first start saw Marco Melandri (BMW Motorrad Motorsport) crash after an attempted pass on Biaggi and he was taken to hospital for scans on a bruised kidney, missing out on any further Portimao action. Tom Sykes: “I’ve got to start by thanking the team and Kawasaki, the boys made a big change in between the two parts and it was a different bike in the second rerun. I was so comfortable and much happier and was able to predict what the bike was doing. We got to the front and managed the tyres very well, racing with these guys was fantastic. It’s good for the championship but we’ll take it race by race.” Results: 1. Sykes (Kawasaki) 16 Laps/73.472 km in 31'42.011 average 139.063 kph; 2. Checa (Ducati) 0.300; 3. Guintoli (Ducati) 2.732; 4. Biaggi (Aprilia) 11.564; 5. McCormick (Ducati) 11.771; 6. Rea (Honda) 11.792; 7. Baz (Kawasaki) 28.693; 8. Aoyama (Honda) 29.581; 9. Badovini (BMW) 31.507; 10. Fabrizio (BMW) 31.587; etc. 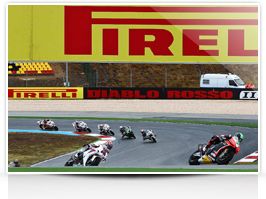 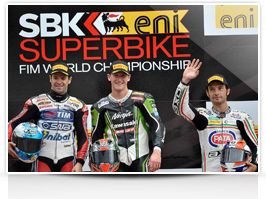 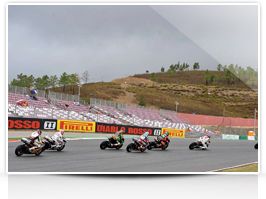 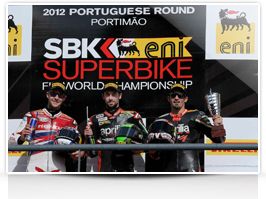 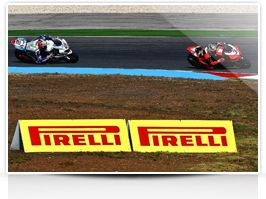 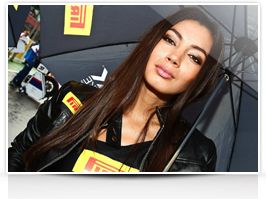 Biaggi asserts his authority at penultimate round
Newsroom