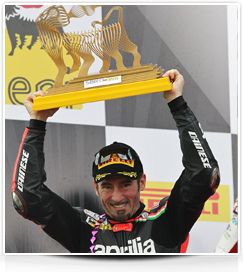 The closest ever finish in the history of the Superbike World Championship came today at Magny-Cours when Max Biaggi (Aprilia Racing) ended the second race in fifth place and in doing so he ended up the season 0.5 points ahead of Tom Sykes (Kawasaki Racing Team). "With the Magny-Cours round Pirelli closes out an important season, the ninth in a row as sole supplier of all the World Superbike Championship classes. But today was above all a day for the participants to celebrate, that is, the riders and the teams. Pirelli congratulates first and foremost Max Biaggi and the Aprilia Racing team who have achieved a splendid double win in a 3 year period in confirmation of the excellent work done by the entire team in the Championship these past few years. It would be impossible, however, not to mention Biaggi’s two fiercest rivals, Tom Sykes on his Kawasaki and Marco Melandri on his BMW, who contributed to making this year an exciting championship down to the last race. This was a Superbike Championship which was marked by an extremely battle between riders from various teams throughout the season. In fact, riders from five different motorcycle manufacturers placed in the top five, demonstrating the excellent work Pirelli has done in developing solutions which work well on different brand bikes. Our compliments also go once again to Kenan Sofuoglu and the Kawasaki Lorenzini team for their win in World Supersport, as well as to Sylvain Barrier and Michael VD Mark for their respective victories in Superstock1000 FIM Cup and Superstock600 UEM European Championship. Also, this year (as in 2011), Pirelli decided to provide incentive for our rising stars in European motorcycling who participate in the national Superstock 600 championships: this is why the Pirelli Superstock 600 Series was established last year, a Pirelli initiative which once again provided the most talented riders from the various European STK600 Championships with the opportunity to take part as wild cards in the last European Superstock 600 Championship race held here in France. The 3 riders who placed the highest in the race standings were Italian Franco Morbidelli who races in CIV, Brit Lee Jackson who races in British Superbike and Austrian Marco Nekvasil from IDM. These riders were awarded a memorial tag and also received a monetary price as an incentive for their growth and careers. In closing, we are very satisfied with the work done this year in the factory derivative Championship and we are ready to take on the next season where we will be faced with a new challenge: the new 17 inch tyres which will replace the 16.5” format which have been used until now in the World Superbike Championship.” - Giorgio Barbier, Racing Director Pirelli Moto PIRELLI BEST LAP AWARDS: SBK Race 1 – Sylvain Guintoli (PATA Racing Team), 1'53.143 (Lap 17) SBK Race 2 – Davide Giugliano (Althea Racing), 1'39.237 (Lap 5) 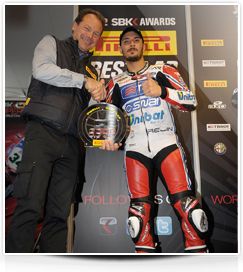 Total BEST LAP (SBK): Checa C. (Althea Racing): 8, Biaggi M. (Aprilia Racing Team): 5; Melandri M. (BMW Motorrad Motorsport): 4; Sykes T. (Kawasaki Racing Team): 3; Guintoli S. (PATA Racing Team): 2; Baz L. (Kawasaki Racing Team): 1; Ayrton Badovini (BMW Mottorad Italia Goldbet): 1; Leon Haslam (BMW Motorrad Motorsport): 1; Laverty E. (Aprilia Racing Team): 1; Davide Giugliano (Althea Racing) : 1 Carlos Checa (Althea Racing) with 8 best lap awards is the 2012 Pirelli Best Lap Winner for Superbike class: FASTEST RIDER OF THE YEAR WSS – Jules Cluzel (PTR Honda), 1'47.416 (Lap 6) Total BEST LAP (WSS): Cluzel J. (PTR Honda): 3; Lowes S. (Bogdanka PTR Honda): 3; Foret F. (Kawasaki Intermoto Step): 2; Parkes B. (Ten Kate Racing Products): 2; Lanzi L. (Prorace): 1; Morais S. (Kawasaki Lorenzini): 1; Kenan Sofuoglu (Kawasaki Lorenzini) : 1 Jules Cluzel (PTR Honda) with 3 best lap awards and the highest position in the overall standings is the 2012 Pirelli Best Lap Winner for Supersport class: FASTEST RIDER OF THE YEAR STK1000 – Sylvain Barrier (BMW Motorrad Italia GoldBet), 1’59.525 (Lap 7) STK600 – Riccardo Russo (Team Italia FMI), 1'44.417 (Lap 6) Biaggi had fallen in the first eni FIM Superbike World Championship race of the day, leaving open a path of opportunity for Sykes and race one second place finisher Marco Melandri (BMW Motorrad Motorsport). With Melandri crashing out in spectacular style in race two it was down to Sykes to make the running and he did it in style after putting in his fourth race win of the year. Biaggi, receiving pit signals from his crew, had worked his way far enough forward to take the overall win and score his second SBK championship, adding to his 2010 season win, again for Aprilia. Biaggi now has two world titles, 21 race wins, 70 podiums and five pole positions to his credit, and four 250GP titles to boot. Max Biaggi: “This is the fourth world championship out of six that I have won at the final race, I seem to like difficult challenges! The 2012 season went right down to the wire: we started well with a win at Phillip Island after totally renewing my team and we also had some difficult moments. We had to work hard to win the title, and maybe for this reason it’s even better. A big thanks to the Team, Aprilia and the Gruppo Piaggio, from President Colaninno to every factory worker, because my success is the result of the work of a great Italian company. Thanks also to my family, my fiancée and my two children, as well as Marino Laghi who is always present with me". In the final championship rankings in 2012, Biaggi has 358 points, Sykes 357.5 and Melandri 328.5. Aprilia also won the Manufacturers’ Championship today, by 23.5 points from BMW. Race 1 An amazing penultimate race, held in wet conditions, saw early contender Biaggi fall on lap two and his two remaining championship rivals, Melandri and Sykes score podiums for second and third respectively. Guintoli continued his amazing form in privateer guise with a clear win, by over six seconds from Melandri and by over 16 seconds from Sykes. This was Guintoli’s third win of the year. 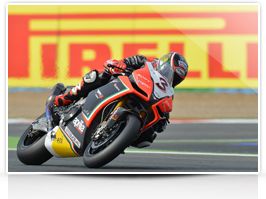 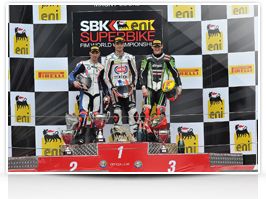 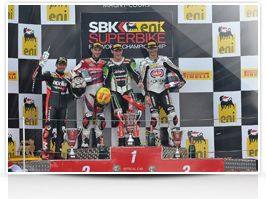 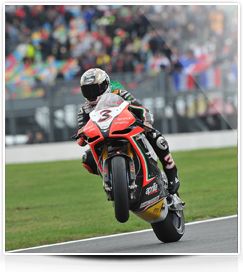 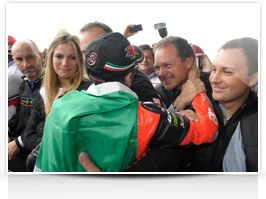 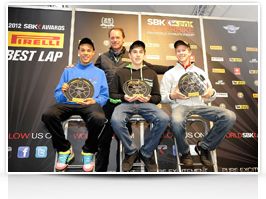