Biaggi has a wonder day as he extends his lead 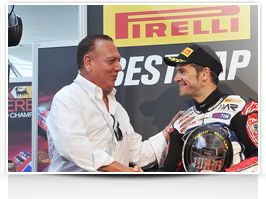 Max Biaggi (Aprilia Racing) left Misano with the sound of his fan club members’ voices ringing in his ears after he completed a home double that will long be remembered by all 67,000 weekend spectators. He pushed his career win total to 19 today. These were Biaggi’s second and third wins of the year, but the first since the opening race in Australia, way back in February. "For the race round on the Misano Adriatico circuit, named this weekend in memory of Marco Simoncelli, the Superbike riders had 3 slick solutions available for the front and no less than 5 solutions for the rear in SC0 and SC1 compounds, including two new tyres and two in oversized profile, along with the standard SC1. The temperature definitely influenced the way the two races went: in race 1 the asphalt temperature was about 15° lower than in race2. Precisely in race2, with higher temperatures, the SC0 solutions like the new R548 and the P1126, which have the same compound but a different profile, definitely performed at the top of their game. This is demonstrated by the BMW Motorrad Motorsport team performance, changing solutions and taking 3rd and 4th places with Leon Haslam and Marco Melandri. Therefore we had some important confirmation in race2 on the soft SC0 solutions, including the new R548 used by about 1/3 of the riders on the grid. The new SC1 R549, on the other hand, was chosen by a few riders in race1 when temperatures were unfortunately not yet suitable for it, and then in race2 many riders obviously switched to other solutions, so we did not have any response that would allow us to assess this solution. As regards the front, on the other hand, 2/3 of the riders opted for the SC1 in the range. We watched two very exciting races and I would like to offer my compliments, first of all to Max Biaggi for his beautiful double win, and also to Davide Giugliano and Carlos Checa for the exciting show they gave us in race1. Moving on to the other categories, in Supersport we saw that the SC1 was more used than the SC0, which however came back into favour when the temperatures went up significantly. My congratulations also to BMW for the fantastic triple that they took in the Superstock 1000 FIM Cup, racing on the new Diablo Supercorsa SC tyre this year. I also want to mention the Coppa delle Due Nazioni which held the first of 3 rounds here at Misano: these riders also used and will continue to use Pirelli tyres, specifically the Diablo Supercorsa in the SC1 compound on both the front and the rear." - Giorgio Barbier, Racing Director, Pirelli Moto Pirelli BEST LAP Awards: SBK Race 1 – Carlos Checa (Althea Racing), 1'36.080 (Lap 8) SBK Race 2 – Max Biaggi (Aprilia Racing Team), 1'36.557 (Lap 3) Total BEST LAP (SBK): Checa C. (Althea Racing): 5, Biaggi M. (Aprilia Racing Team): 4; Sykes T. (Kawasaki Racing Team): 2; Guintoli S. (Team Effenbert Liberty Racing): 1; Melandri M. (BMW Motorrad Motorsport): 1 WSS – Fabien Foret (Kawasaki Intermoto Step), 1'39.513 (Lap 4) Total BEST LAP (WSS): Lowes S. (Bogdanka PTR Honda): 2; Foret F. (Kawasaki Intermoto Step): 2; Parkes B. (Ten Kate Racing Products): 1; Lanzi L. (Prorace): 1; Stk1000 – Lorenzo Baroni (BMW Motorrad Italia GoldBet), 1’39.248 (Lap 5) Stk600 – Michael Vd Mark (EAB Ten Kate Junior), 1'42.221 (Lap 10) Having started off the third row in each race Biaggi made up places quickly and held off the close pressure from Carlos Checa (Althea Racing Ducati) in race one, then he had a clear win from Jonathan Rea (Honda World Superbike Team) and Leon Haslam (BMW Motorrad Motorsport) in race two. Biaggi has been the most consistent of the top riders in 2012 so far, but today he proved that when his bike is right he can also compete for race wins again. 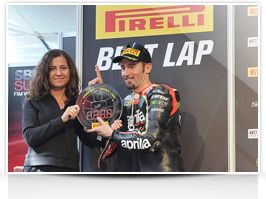 Another rider from Rome, Davide Giugliano (Althea Racing Ducati) had a podium day, third in race one, his second top three finish as a rookie in SBK racing. Off the podium positions at Misano, Chaz Davies (ParkinGO MTC Aprilia) was an excellent sixth, after starting 21st on the grid, while Kawasaki Racing Team rider Loris Baz rode with panache and pushed to score eighth in race two, just behind his team-mate Tom Sykes. Wild-card man Matteo Baiocco (Barni Racing Team Ducati) was 15th in race one but a much-improved tenth in race two. In the championship fight, Biaggi is on 210.5 points, Rea is second on 172 and Tom Sykes (Kawasaki Racing Team) has 164.5, after finishing fourth and seventh today. Race 1 Biaggi rode from the third row to the win, after a superb performance in front of his home crowd. With many passes and changes throughout the race he had to ride hard at the end to defend from another lowly starter, Checa, who finished second, having started 16th. Giugliano secured a combative third place, with Sykes fourth after riding up front at the start, then dropping to seventh for a time. He overhauled long time race leader Jonathan Rea. Max Biaggi: “This weekend didn’t start in the best way for us, that kind of Superpole out of the top 4 made it so difficult to come back. There are not many places to overtake here at Misano but in the end I found a way, someone made some mistakes, and little by little we tried to climb the mountain to get to the top.” 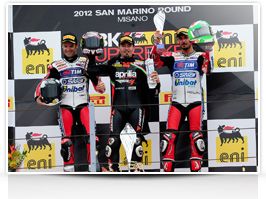 Carlos Checa: “It was an amazing result considering the position we started in. Today we fixed yesterday’s mistake, finally fighting for the win which was unthinkable because of the difficulties in this track to overtake. Second and third is great for the team, it was tough and in the end Max was stronger.” Davide Giugliano: “This is a track I like a lot and where the Ducati has always gone well but now we have to confirm our good form. The race was splendid, I demanded a lot from the bike and the tyres for half the race, then after the mid-point I began to suffer. I knew that Carlos and Max were arriving, then when I saw the black ‘shadow’ of Biaggi let’s say it wasn’t much fun because I used to watch him all the time on TV when I was a kid!” Results: 1. Biaggi (Aprilia) 24 Laps/101.424 km in 38'58.471 average 156.139 kph; 2. Checa (Ducati) 0.305; 3. Giugliano (Ducati) 4.503; 4. Sykes (Kawasaki) 8.858; 5. Rea (Honda) 11.627; 6. Davies (Aprilia) 12.258; 7. Laverty (Aprilia) 12.551; 8. Guintoli (Ducati) 13.561; 9. Smrz (Ducati) 17.014; 10. Camier (Suzuki) 18.361; 11. Badovini (BMW) 20.029; 12. Haslam (BMW) 22.082; 13. Berger (Ducati) 22.966; 14. Fabrizio (BMW) 27.014; 15. Baiocco (Ducati) 31.133; 16. Aoyama (Honda) 31.719; etc. Race 2 Biaggi secured a second brilliant victory, pulling clear after some early action with other riders and winning by a margin of 5.355 seconds, easing down in the final lap. Rea and  Haslam had a long fight for second with Rea securing it. Marco Melandri (BMW Motorrad Motorsport) and Ayrton Badovini (BMW Motorrad Italia Gold Bet) had another personal duel that went the way of Melandri. The top five riders were covered by only seven seconds at the flag. Race one co-stars Checa and Giugliano each crashed out of race two. Max Biaggi: “It was an unbelievable weekend, it was such a long time since my first win in Australia in February. Now we are back in first position and it’s great. This race was amazingly difficult, much sliding of the tyres, chattering and it’s a difficult place to race at the top level. I won these races that make me happy, one in the last two laps and the other when you take the lead and go. I can’t ask for more, thanks to all the boys who always try to help me win.” Jonathan Rea: “Really happy, my bike worked pretty good. I felt like I was riding well and enjoying myself as well. I had stronger pace than Sykes at the beginning and once I got past I could maintain the pace to Max who was on race management. Now we go on to Aragon where I haven’t ridden yet so I’m quite motivated for that. Thanks to all the Italian fans who were cheering me on today!” Leon Haslam: “After race 1 when we had tyre issues from half distance on the boys worked really hard to change the set-up. We made a different tyre choice and the rear was much better. I struggled with the front and that made it difficult to get past Johnny, but it was another good battle and fair play to those guys” 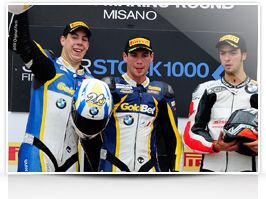 Coppa dei Due Paesi (Two Nations Cup) Leonardo Leuthe Biliotti (Team Trasimeno Yamaha) won the Coppa dei Due Paesi race today, with Denis Sacchetti (SD Rider Team Kawasaki) only 0.730 seconds behind. Alessia Polita (Team Trasimeno) was third after holding off the push of Patrik Vostarek (Motorpower Honda) across the line. Dakota Mamola (Yakhnich Motorsport Yamaha) was fifth. This was the first of three rounds of the championship, which will continue at Brno and culminate in Russia, at Moscow Raceway.

Biaggi has a wonder day as he extends his lead
Newsroom