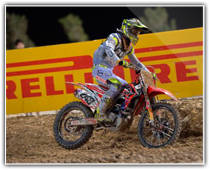 It was a triumphant season-opener for Pirelli at the Grand Prix of Qatar of the FIM Motocross World Championship. Tim Gajser, who used Pirelli SCORPION™ MX32™ 80/100-21 front and 120/90-19 rear, won both races and leads the championship standings. Second place went to defending champion Romain Febvre, who preferred the SCORPION™ MX32™ 110/90-19 on the rear. Jeremy Van Horebeek was fourth overall ahead of Antonio Cairoli. 15 riders out of the 21 of the MXGP class relied on Pirelli tyres at Losail. The new Suphan Buri track in Thailand hosted the second round. A double victory in MXGP class was taken by Febvre. He raced with SCORPION™ MX32™ 80/100-21 front and 110/90-19 on the rear and also grabbed the top spot in the championship standings. An excellent second place belonged to Gajser who preferred the SCORPION™ MX32™ 120/90-19 rear tyre. Van Horebeek finished the Grand Prix on the third step of the podium. In Thailand Pirelli was the tyre chosen by the majority of riders with 16 out of the 23 starters in MXGP. After completing the first two rounds of the season, the riders and teams gathered at the Grand Prix of Europe, hosted in Valkenswaard in Holland for round three of eighteen. Febvre won again, consolidating his top spot in the championship standings. He used SCORPION™ MX SOFT 410™ 120/80-19 rear and SCORPION™ MX32™ 80/100-21 front. A great second place belonged to Max Nagl who preferred the SCORPION MX™ 410™ 110/90-19 rear. Third place overall for rookie Gajser. 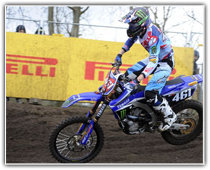 For the fourth round of the season, the championship arrived, for the second year in a row, in Neuquen, Patagonia. An awesome race by Gajser in MXGP class grabbed the overall victory. On track with SCORPION™ MX SOFT 410 120/80-19 at the rear and SCORPION™ MX32™ 80/100-21 front, he finished third in the first heat and won the second. An excellent second place went to Cairoli who managed to climb back on to the podium after ten months; he preferred the SCORPION™ MX SOFT 410 110/90-19 at the rear. The same tyre was used by Nagl who reached third place overall. There was a good performance by Febvre who finished fourth in the GP and remains on top of the overall standings.