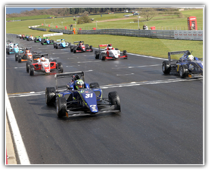 The prestigious British Formula 3 name has returned for the 2016 season, with the Pirelli-supplied BRDC Formula 4 Championship taking on an elevated status. The renaming of the BRDC British Formula 3 Championship reflects the increased performance level of the new Tatuus-Cosworth car that was introduced for the Autumn Trophy last November. With a 230bhp engine and upgraded aerodynamics, laptimes in testing were close to the F3 record pace on UK circuits. The name change positions the championship as a step up from the FIA Formula 4 series and a feeder into categories such as European F3 or the Formula 1-supporting GP3 Series, which is also supplied by Pirelli. FIA Super Licence points will be on offer to the top five drivers in the final standings.