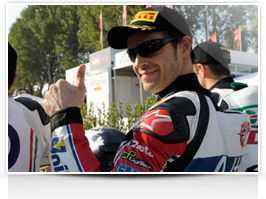 Carlos Checa (Althea Racing Ducati) came within three points of winning the Superbike World Championship outright at Imola, after posting a third place in race one and his 12th victory of the year in race two. He was only stopped in his title tracks by the eighth and sixth places put in by Marco Melandri (Yamaha World Superbike Team) who is now 97 points behind Carlos with only two rounds left to go. Had Melandri left 100 points or more behind the Spaniard, Carlos would have been champion today. “Throughout the entire weekend at Autodromo of Imola we saw excellent climate conditions, and as such, relatively high temperatures. Consistent with the current development model in Supersport, Pirelli was prepared with 3 front and 3 rear solutions for this class. For this round of SBK we have prepared for a total 4 front and 4 rear solutions as a final measure of consolidating solutions currently being developed for the upcoming 2012 Diablo racing tire range. Considering the recent asphalting of this historic Italian circuit, a totally new SC2 front tyre solution was available for the race at Imola offering both better grip and a more stabile feeling to the rider. The tyre’s compound is slightly harder than mid-soft solution “B”, and was already proven successful when it was selected by 14 riders in Race 1 and Race 2. As for the rear, the current championship leader Checa (Ducati) opted for the harder “D” solution for Race 1 and arrived third place overall. In Race 2, Checa and Melandri (Yamaha) both moved to the softer “B” solution rear, which in Race 1 had already been chosen by most riders. With this slight change, Checa managed to improve his race performance, setting the Best Lap on the 13th lap shortly before taking the lead and the victory, increasing his points lead towards the 2011 world title. With these new solutions for Imola, fastest lap times dropped about 1 second as compared to last year in the Superstock 600, Superstock 1000 and Superbike classes. ” - Giorgio Barbier, Racing Director, Pirelli Moto Pirelli BEST LAP Awards: SBK Race 1 – Noriyuki Haga (Althea Racing), 1'47.960 (Lap 12) SBK Race 2 – Carlos Checa (Althea Racing), 1’47.934 (Lap 13) Total BEST LAP (SBK): Checa C. (Althea Racing): 8, Biaggi M. (Aprilia Alitalia Racing): 5, Melandri M. (Yamaha World Superbike): 3, Haga N. (PATA Racing Team Aprilia): 3, Sykes T. (Kawasaki Racing Team Superbike): 1, Camier L. (Aprilia Alitalia Racing): 1, Fabrizio M. (Team Suzuki Alstare): 1 WSS – Fabien Foret (Hannspree Ten Kate Honda), 1’52.059 (Lap 11) Total BEST LAP (WSS): Foret F. (HANNspree Ten Kate Honda): 3, Lowes S. (Parkalgar Honda): 2, Scassa L. (Yamaha ParkinGO Team): 1, Davies C. (Yamaha ParkinGO Team): 1, Rea G. (Step Racing Team): 1, Harms R. (Harms Benjan Racing Team): 1, Ellison J. (Bogdanka PTR Honda): 1 Stk1000 – Davide Giugliano (Althea Racing), 1’50.299 (Lap 6) Stk600 – Michael Vd Mark (Ten Kate Junior Team), 1'55.110 (Lap 8 ) A superb day of entertainment saw Jonathan Rea win for Castrol Honda in race one, from Noriyuki Haga (Pata Aprilia) who in the absence of former championship challenger Max Biaggi (Aprilia Alitalia) was the top Aprilia rider on show, finally posting two second places. Leon Camier (Aprilia Alitalia) was also a podium man today, despite running off the circuit in race two. A wide range of machines filled the top places at Imola, with Honda, Ducati, Aprilia, Kawasaki and BMW machines all taking a turn inside the top five. Behind those dizzy heights, and in front of a 78,000 strong impassioned crowd, Effenbert-Liberty Ducati riders Sylvain Guintoli and Jakub Smrz were sixth and seventh respectively in race one, and Guintoli seventh in race two. Home rider Michel Fabrizio (Suzuki Alstare) had a miserable time and crashed in race one, retiring in the second 21-lap contest. Tom Sykes was on course for two top four places until his Kawasaki Racing Team Superbike machine stopped with braking issues in race two. He was only just beaten to the podium by Checa in race one. Leon Haslam (BMW Motorrad Motorsport) was top BMW finisher today, fifth in race two. Race 1 Rea won his second race of the year with a front-running display that needed to be strong in the final laps to hold off Haga. Behind the leading two, by some nine seconds, Checa scored an important podium but had to wait until the final lap to get the better of the impressive Sykes. Championship hopeful Marco Melandri was only eighth, after getting involved in several fights in the middle order. Jonathan Rea: “It’s a great day for me especially after my race at Imola here last year and my injuries, so all credit to everyone for getting me back to the top step. Nori kept me on it for the whole race, I had to dig so deep at the end to try and get that win, but I’m so happy, we’re a very strong team.” Noriyuki Haga: “First of all I made a mistake at the start and then to make up positions I used a lot of my stamina to catch up the pack. I tried to push until I caught up with Johnny, but he was riding very well and I didn’t find any space to pass him in the corners.” Carlos Checa: “It was a nice clean and exciting fight with Tom until the end, I was a bit quicker than him. We passed each other three or four times, I didn’t want to touch him but on the outside I was able to keep the position and take him. It’s always nice to be on the podium especially at Imola with this situation in the championship!” 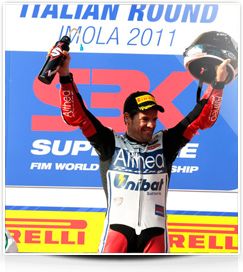 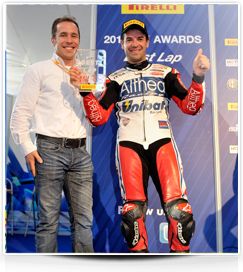 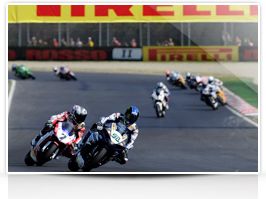 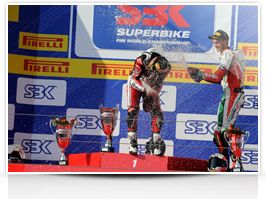