Checa and Sykes trade wins on day of contrasting conditions

World Championship leader Carlos Checa (Althea Racing Ducati) once again showed the reasons why he is out front in the points standings with three rounds to run, after posting an assured win in race one and then holding his nerve in atrociously wet conditions in race two to score points for eighth place – all on a day when his main championship rival was ruled out. 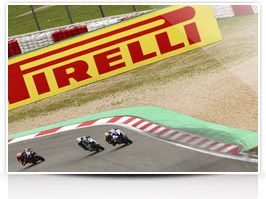 A new rider also took his place at the top table of WSBK race-winning riders today, and on a new machine in the 2011 Kawasaki Ninja ZX-10R. Tom Sykes won for the Kawasaki Racing Team Superbike squad in a race in which only 13 riders finished in treacherous track conditions. Sykes is the sixth individual race winner of the 2011 season so far, with three rounds and six races left to run. Title challenging Aprilia Alitalia rider Max Biaggi missed out on raceday altogether after the injury to his left foot he picked up on Friday proved too difficult to overcome, but the new second ranked rider, Marco Melandri (Yamaha World Superbike Team) showed real fighting qualities in dry and wet conditions, scoring second in race one and splashing his way to sixth in the second race, which was shortened because of the rains.

A great start to the day for Noriyuki Haga (Pata Aprilia) saw him third ahead of the factory Yamaha of Eugene Laverty (Yamaha World Superbike Team) in race one, but then fall from a winning position in race two, caught out by an increase in the intensity of the rain. An excellent day for the privateers saw not one but two Effenbert Liberty Racing Team Ducati riders on the race two podium when Sylvain Guintoli was second and Jakub Smrz third. Jonathan Rea (Castrol Honda) had a good comeback weekend in many ways, topped of by fourth in race two, but his fellow Briton James Toseland (BMW Motorrad Italia SBK) fell out of contention in race two and suffered a bruised right elbow and a cut on his left elbow. Michel Fabrizio (Suzuki Alstare) suffered with a painful right hand after a collision in race one, and finished 16th in the opener, and a retiree in the second. Joan Lascorz (Kawasaki Racing Team). Leon Haslam (BMW Motorrad Motorsport) had a fifth and a ninth in BMW’s home races. Race 1 Checa posted a superb opening win, holding off early aggression from eventual podium man Haga before gapping all his pursuers in clinical style. Second was Melandri, Haga was third and then - in an eventually lonely fourth - Melandri's team-mate Laverty. Haslam had been fifth early on then ran off track, climbing back from 14th place at one stage to re-take fifth. Guintoli was a confident top six finisher, some seven seconds ahead of top Kawasaki man Joan Lascorz (Kawasaki Racing Team) who recovered from a bad start to take Leon Camier (Aprilia Alitalia) over the line. 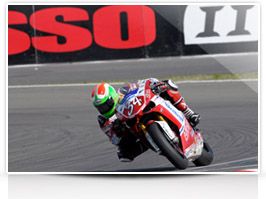