Checa up and down as Melandri wins another

On a sunny race day at Miller Motorsports Park the sixth round of the eni FIM Superbike World Championship delivered some great action and two different race winners to the 49,000 strong weekend crowd. In a landmark day for the series, race one saw World Superbike reach its 600th individual race mark. "The two overseas World Superbike races held at Miller Motorsports Park offered Pirelli important feedback for its work over the last few months with the new R302 rear tyre, developed from the reference SC1 compound as an alternative for use also under lower temperatures and to prevent cold tearing often encountered with the use of soft compounds in harsh conditions. The R302 solution was first used by SBK riders at the Imola test, followed by a successful first-race showing at Donington Park in mid-May receiving great appreciation from nearly all riders. For this reason Pirelli made available this tyre for the USA round which proved positive: in both R1 and R2 the R302 solution was preferred to the SC1 and SC2 reference tyres by 20 of 24 SBK riders on the grid, and as a demonstration of its excellent adaptability to the various motorcycle makes, in the first 5 positions for both races were seated four different teams. We leave the USA very satisfied with how this weekend unfolded both for how this new tyre performed as well as how it positively contributed to the two very equal and winning races." - Giorgio Barbier, Racing Director, Pirelli Moto Pirelli BEST LAP Awards: SBK Race 1 – Marco Melandri (BMW Motorrad Motorsport) 1'48.867 (Lap 18) SBK Race 2 – Carlos Checa (Althea Racing) 1'48.820 (Lap 2) Total BEST LAP (SBK): Checa C. (Althea Racing) 4, Biaggi M. (Aprilia Racing Team) 3, Sykes T. (Kawasaki Racing Team) 2, Guintoli S. (Team Effenbert Liberty Racing) 1, Melandri M. (BMW Motorrad Motorsport) 1 Carlos Checa (Althea Racing Ducati) and Marco Melandri (BMW Motorrad Motorsport) took one race victory apiece, but the weekend winner was the rider who finished third each time today, Max Biaggi (Aprilia Racing). With his haul of 32 points Biaggi now leads the series by 18, from Melandri and Tom Sykes (Kawasaki Racing Team). Jonathan Rea (Honda World Superbike Team) was the other podium finisher today, second in race two, and after scoring fourth in race one he is fourth overall and only 1.5 points from Melandri and Sykes. It was a truly up and down day for Checa, as he fell in race two. His fourth no-score of the season, coming along so shortly after his fourth race win, puts him fifth overall. Race 1 Checa pulled a controlled win out of the bag, eventually heading home Melandri by 2.313 seconds. Third was Biaggi who had to work hard in the final laps to hold off Rea. Eugene Laverty (Aprilia Racing) finished fifth, with pole man Jakub Smrz (Liberty Racing Team Effenbert Ducati) sixth. Slowing front row starter Tom Sykes was finally caught by Chaz Davies (ParkinGO MTC Aprilia) with Davies seventh and Sykes eighth. 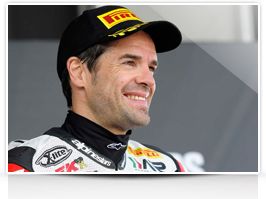 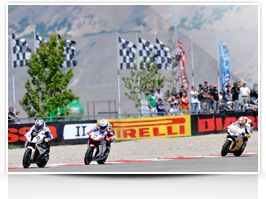 Race 2 Melandri and Rea went 1-2 in the second race at Miller, which was halted, shortened to 18 laps, and then re-started late after an oil spill following a crash. The wait was worth it for the spectators as the last lap fight was tense and exciting right up until Melandri took his second win of 2012, by only 0.195 seconds. Biaggi was third and Davies fourth, easily the SBK rookie’s best result of the year. Fifth was Sykes, sixth came Laverty, with Davide Giugliano (Althea Racing Ducati) seventh. Early leader Carlos Checa was unlucky to fall and no score. Marco Melandri: “It was such a difficult race for me, I was lucky for sure when Carlos made a mistake. I was struggling a little bit with a full fuel tank but after 50% of the race it was getting better. When Johnny passed me he was much faster than me, and I lost a bit of concentration, so Max passed me and then Chaz Davies did as well. So I tried to stay calm, take my rhythm and try to get a good feeling to catch Johnny. I was very lucky because my engine was so strong so I could pass him on the straight. Otherwise for me it would have been really difficult to pass him. So a podium in race one and a win in race two is really unbelievable.” 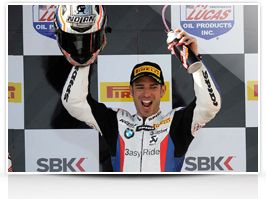 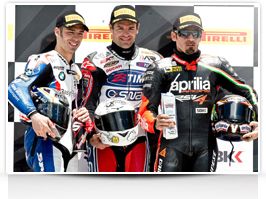 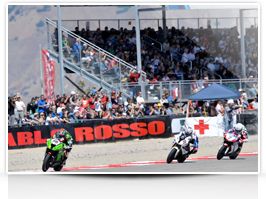 Checa up and down as Melandri wins another
Newsroom