GP3 report: Valencia 15-16 June 2013 GP3 drivers Conor Daly and Robert Visoiu demonstrated perfect management of Pirelli’s medium compound tyres over the weekend to bring home one race victory each at a stand-alone event that was held at the Ricardo Tormo circuit in Valencia. The 4.05-kilometre Ricardo Tormo circuit is very technical with a long straight immediately followed by 14 corners. Due to its versatility the Pirelli medium compound yellow tyre was the perfect choice for Valencia’s variable track conditions. Ricardo Tormo was previously used for Pirelli’s Formula One testing before the Italian tyre firm signed as official tyre supplier back in 2011 but as a result of recent resurfacing there was little data available for the GP3 crews ahead of the race. 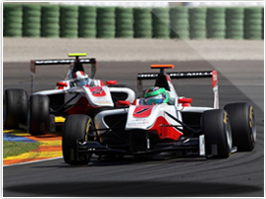 America’s Conor Daly, however, took it all in his stride as he took pole position and a dominant race one victory on Sunday morning. His second win of the season was made even more special after Daly’s ART Grand Prix team-mate Facu Regalia finished runner-up. Koiranen GP rookie Kevin Korjus completed the podium. Robert Visoiu was the victor of race two as the Romanian driver claimed his first win of his GP3 career. Starting from reverse pole, Visoiu controlled a lights-to-flag victory and took a resounding victory of more than seven seconds. Koiranen GP’s Aaro Vainio finished second with Carlos Sainz Jnr. finishing third. Pirelli’s racing manager Mario Isola said: “Without the presence of Formula One and GP2, the weekend was the perfect opportunity for the GP3 crews to showcase their talent – and I am delighted to say that this is exactly what happened. There was some world-class driving in Valencia this weekend which confirmed just how many talented drivers are currently competing in the first rung of international motorsport competition. Ricardo Tormo is a demanding circuit but our Pirelli tyres did not falter throughout both 18-lap races, proving 100% reliable from start to finish. Our GP3 crews are used to racing first thing in the morning or last thing, but as Valencia was a stand-alone GP3 event the teams were racing during the middle of the day where track temperatures topped 61 degrees. However, the GP3 drivers managed the tyres and the cars perfectly and I would like to congratulate Visoiu for his debut win of the season and Daly on his second GP3 win of the year.” Tio Ellinas currently leads the GP3 drivers’ standings with 55 points. Thanks to his race one victory on Sunday, Daly is now second with 51 points. Round three of the Pirelli-supported GP3 series will take place in Silverstone as part of the Grand Prix weekend on 28-30 June.