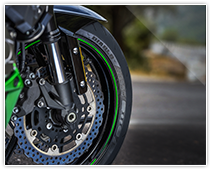 The new DIABLO ROSSO™ III, launched by Pirelli in 2016, has been elected best supersport tyre of 2017 by the prestigious German magazine Motorrad. The supersport tyre comparative organized by Motorrad is an initiative which is always strongly awaited by the readers, Germans and globally, and by the tyre manufacturers. This is due both to the renowned prestige of the magazine and to the independence and comprehensive analysis carried out by the expert journalists and testers of the magazine during the test. Winning the comparative tests organised by Motorrad has always been a source of pride. Issue 11/2017 of the German magazine compared the Pirelli DIABLO ROSSO™ III with the best supersport tyres available, equipping six Kawasaki Ninja ZX-10R in the 120/70 ZR17 sizes for the front and 190/55 ZR17 rear. Pirelli DIABLO ROSSO™ III has thus been elected the winner, showing the tyre to have the most balanced behaviour in all the tests made, thanks to the characteristics of sportiness and dry on-road handling which have traditionally characterized Pirelli’s products. Specifically, the tyre of the Milanese brand, has scored 453 points, out of a total of 500 points available, with a gap of as many as 14 points from the last tyre ranked, the Michelin Power RS and the Continental Sport Attack 3. The test took place on a road trip between Germany, France and Spain and on two tracks: the Alcarrás Circuit for the dry track test and 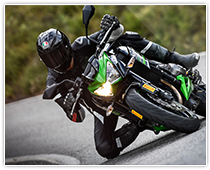 Bridgestone’s Technical Center Europe in Rome, precisely in Castel Romano, for the wet test. DIABLO ROSSO™ III managed to overcome and excel in all the tests: on track it was appreciated especially for the precision and for the high level of grip, whereas on the wet test it was the product with the highest scores for braking distance. In addition, DIABLO ROSSO™ III has impressed with its low level of wear and performance consistency proved during the 4.000 kilometres ride.