Pirelli DIABLO™ Superbike won the comparative test conducted by the German magazine PS, which has compared the racing slick tyres of six different manufacturers, by testing them on track at the Sachsenring circuit. This test involved Christian Kellner, a former FIM Supersport World Championship rider, and it saw an assigned rating to each tyre set for handling, steering precision, stability, grip, behaviour to the limit, braking stability, feedback transmitted from the tyre to the rider and also the best lap time on track. DIABLO™ Superbike was tested using the SC2 compound (hard) for the rear tyre and the SC1 compound (soft) for the front one. In particular, Pirelli DIABLO™ Superbike were the best tyres overall regarding the grip offered and the behaviour to the limit, as well as achieving the fastest lap of 1’32.46 with about a 2.5 tenths of a second advantage over their nearest rival. PS positively comments on the results obtained from DIABLO™ Superbike, calling it simply the ‘tyre of dreams’ because it allows you to go even faster on track while always ensuring  clear feedback and alerting the rider when near to the limit. 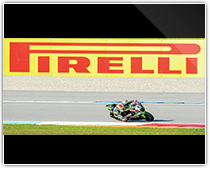 Since 2005, the year of its birth, DIABLO™ Superbike is both the top product of the racing range of the long P brand, the protagonist of MOTUL FIM World Superbike Championship and also a benchmark for those seeking the ultimate performance on track.
Newsroom