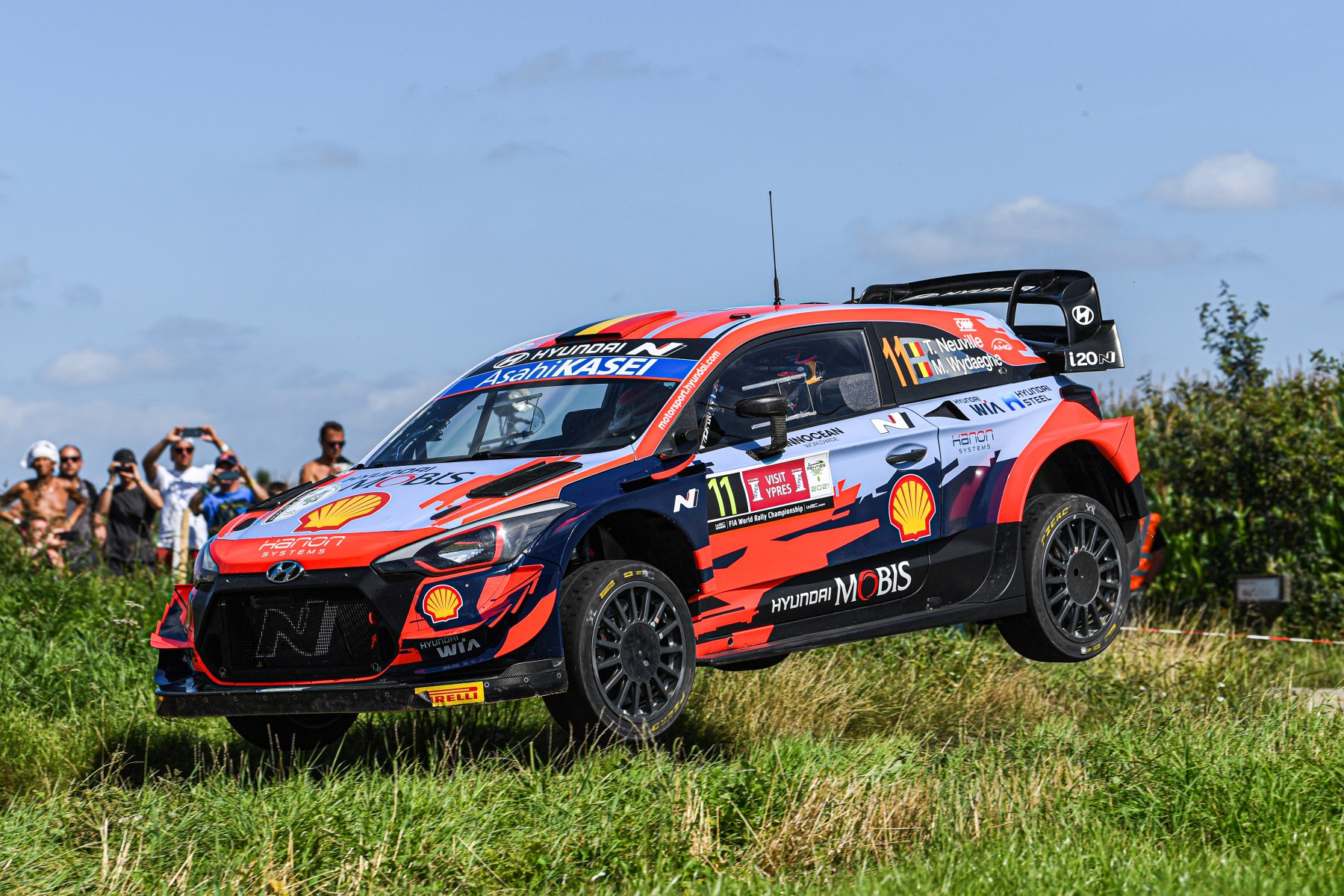 Milan, August 15, 2021 – Hyundai’s Thierry Neuville dominated his home Ypres Rally Belgium: a classic asphalt event making its debut on the World Rally Championship this year. Neuville, who won seven of the 19 stages that were run, led home a Hyundai one-two ahead of his team mate Craig Breen, while Toyota’s Kalle Rovanpera finished third.

Pirelli’s P Zero RA soft compound tyre was the main choice for Ypres, but the conditions mainly favoured the hard. This was able to cope with the wide variety of conditions and provide an instant turn-in response on the many tight corners, often following heavy braking areas. Conditions were generally very warm, but a frequent hazard was the dirt and gravel on the asphalt roads put down by previous cars cutting corners. The P Zero’s renowned ability to find grip even when conditions were marginal was key to success.

The longest stage of the opening day was different in character to the mostly flat stages that typify the Ypres Rally, featuring a section over the Kemmelberg hill that is better known for its role in cycling races than motorsport. Under the trees the surface was damp and dirty in places, and the quick descent ran over cobblestones, reducing the available grip even further. By winning this stage, Neuville nearly doubled his lead and laid the foundations for a historic win.

Terenzio Testoni, rally activity manager: “We came here with the P Zero RA soft tyres as the main choice, but the unusual weather conditions shook up all the expectations. Nonetheless, the hard tyres showed themselves to have a wide range of usage conditions and proved to be reliable both on the first run through the stages, characterised by a dirty surface and low temperatures, as well as on the second run with cleaner roads and higher temperatures. It’s no coincidence that the fastest time on the stages were set with the hard tyres. The biggest surprise of the rally was the unusually dry conditions and warm weather, in excess of 30 degrees on occasions. This combination put the tyres under considerable stress, but they stood up to the challenge impressively.”

Ypres was a brand new event for many drivers with a specialised set of characteristics, run mainly over narrow farm tracks with deep ditches on either side, which can often catch people out. This was an extremely diverse rally with a wide-ranging collection of surfaces – varying from cobblestones, to mud, to the smooth asphalt of Spa-Francorchamps. The roads were often dirty and slippery, so just keeping the car on the road and adapting to a very different event within a uniquely compact timeframe was the biggest challenge. Neuville’s home experience proved vital in sealing his victory by more than 30 seconds.

The WRC2 category was won by Jari Huttunen in the new Rally 2 Hyundai, while Yohan Rossel won WRC3 in a Citroen C3. The Junior WRC category (which also runs exclusively on Pirelli tyres) was won by Jon Armstrong in the Ford Fiesta Rally 4 by one minute, closing to within three points of Sami Pajari, who finished second in Belgium and retains the Junior championship lead.