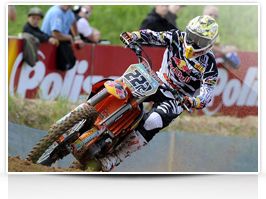 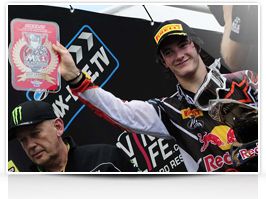 Heavy rainstorms, sand, mud and also twists were the features of the Grand Prix of Latvia where the Scorpion MX ruled both the MX1 and the MX2 podiums. 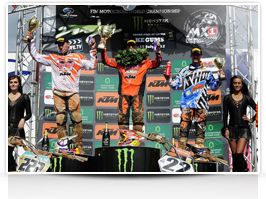 The premier class saw Antonio Cairoli returning to the top step of the rostrum and regaining control of the MX1 standings just one event after he was forced to retire in both motos. The works KTM rider controlled the first race and finished as runner-up in the second despite a hefty crash, which instigated a fast and furious recovery on a difficult surface. With this firm statement of intent (that was made like the other Pirelli riders with the selection of MidSoft 32 front and MidSoft 32 Mud rear) the Sicilian was able to forge a 12 point cushion over Clement Desalle; the Suzuki man sacrificing the red plate after only one meeting after crashes in both motos. In second place overall was Ken De Dycker, who strode the podium for the first time this season and for the first time with the factory KTM, and who headed another SX-F rider in the form of Kevin Strijbos who made the top three for the second Grand Prix in succession. 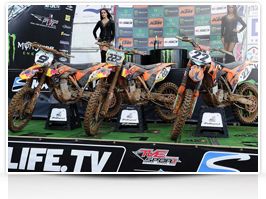 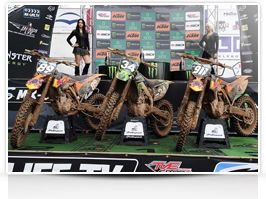 There was major drama in MX2 and the events of the motos placed large stress on the shoulders of the two Pirelli protagonists fighting for the title. Tommy Searle had to retire from both races with technical problems and while he conceded valuable championship points to Jeffrey Herlings - who claimed second place in the first race – the Dutchman was also forced to the sidelines later in the afternoon with his own mechanical trouble. The day therefore belonged to Joel Roelants, claiming the first moto and was second in the next outing as the Belgian defeated factory KTM riders Jeremy Van Horebeek and Jordi Tixier; the latter celebrating his first career podium finish. 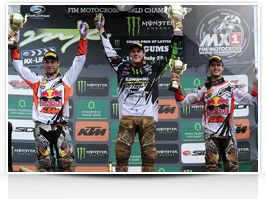 Round eleven will take place on July 20th at the Russian circuit of Semigorje located around 500km east of Moscow.­­ 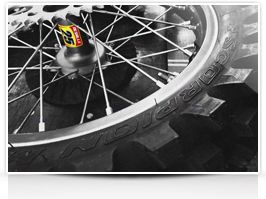 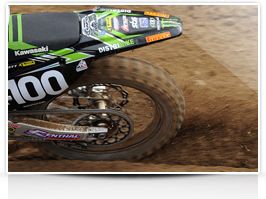