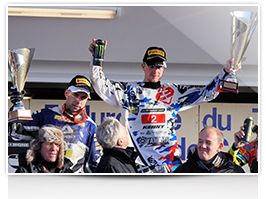 Cairoli with no opponents in MX1 and Elite, Tixier won MX2, Bernardini won 300 and Furbetta won 125; complete Pirelli podium at the Enduropale du Touquet After the wipeout in the first round of the Internationals of Italy, Pirelli Scorpion MX tyres did an encore winning for the second consecutive time in all four classes of the second-last race of the championship. United by the unanimous preference given to Pirelli Scorpion MX MidSoft 32F front and rear, Pirelli riders were led by Antonio Cairoli, who has re-imposed with a stunning superiority in both the MX1 and Elite classes, ardently supported by his home fans. In both classes the Sicilian defeated Jeremy Van Horebeek and the Husqvarna rider Todd Waters, followed by teammate Tyla Rattray; sixth Davide Guarneri, who distinguished himself finishing fourth in the final heat. Complete Pirelli podium in MX2 as well, thanks to a tough performance by official KTM Frenchman Jordi Tixier, that before winning 250 Elite class also, imposed himself with a good lead over his compatriot Christophe Charlier whose performance has allowed him to become the leader of the championship; third place for Alex Lupino, that retired during the last lap of the closing race because of mechanical problems, preceded by Charlier author of a crash. 125 class this time brought to the fore Antonio Cairoli’s pupil Joakin Furbetta, but thanks to fourth place overall, Tommaso Isdraele maintained the lead of the championship; Samuele Bernardini reached the highest step of the 300 class podium. 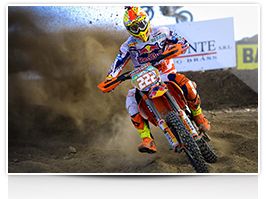 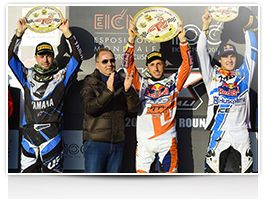 The triumphal day of Pirelli Scorpion MX has been crowned by Adrien Van Beveren, Antoine Meo and Steve Ramon success. On the Enduropale du Touquet terrific sand they were awarded respectively the first, second and third places sharing the same tyres, Scorpion MX MidSoft 32F front and Soft 410 rear, giving to Pirelli’s colors the eleventh consecutive year of victories in this tough and selective French competition. Internationals of Italy championship will end on February 16th with the last race that will be held on the famous Tuscany track in Montevarchi (Italy).