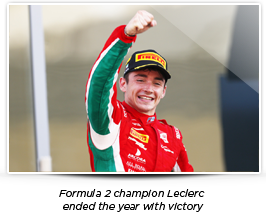 Feature Race, the winner: Tyre strategy was at the forefront of the Formula 2 Feature Race, with very different approaches deciding the outcome. DAMS driver Oliver Rowland started on the supersoft and then made an early switch to soft on lap eight, managing the compound perfectly to the finish. After the race, Rowland and Prema’s Antonio Fuoco were penalised for technical infringements. This promoted Russian Time’s Artem Markelov (who ran an identical strategy to Rowland) and Prema’s Charles Leclerc to first and second.

Artem Markelov: “I had a really good start and tried to get a gap to the guys behind but I was also thinking of tyre degradation, so I was trying to look after them and calm down. After my stop, I was really struggling on my first two laps with the wheels locking, but I still managed to have a gap to Charles, so I wasn’t worried.”

Feature Race, alternative strategy: Newly-crowned champion Leclerc ran the opposite strategy: starting on soft to lead for a large part of the race after the supersoft starters pitted. He then switched to supersoft on lap 23, but experienced tyre degradation at the finish – obeying team orders to let his team mate Fuoco past him.

Sprint Race, the winner: Leclerc added to his remarkable season by sealing a seventh win this year on the final lap, when he passed ART’s Alexander Albon, who had led from the beginning. The sprint race was held in warm temperatures, and was all about preserving the soft tyre for the duration of the 22-lap encounter, with no mandatory pit stops. Feature Race, the winner: Arden’s Niko Kari triumphed in the Feature Race, which was disrupted by two Virtual Safety Cars, managing his soft tyres perfectly at every re-start. The Finn built his victory on a bold overtaking move at the first corner and was never headed – despite an intense battle behind him.

Sprint Race, the winner: Another debut win was taken, this time by Trident’s Dorian Boccolacci. His team mate Ryan Tveter, who started from reverse pole, finished second after being overtaken on lap three.

Pirelli’s head of car racing Mario Isola: “Tyre strategy was at the centre of the Formula 2 feature race, which was held in the evening under the lights. The GP3 race was a completely different challenge, all about making the soft tyres last in the heat of the day. It's been another thrilling season in which we’ve seen some very exciting races and talented drivers in both championships. We've also been privileged to enjoy another perfect collaboration with the series promoters, who once more have done a brilliant job this year.”

NEXT RACES Formula 2 will resume at the 2018 Bahrain Grand Prix Prix from April 7-8, with GP3 to restart at the Spanish Grand Prix from May 12-13 – although there is a busy schedule of testing planned before then: including sessions at Abu Dhabi this week.