Drivers give thumbs up to new Pirelli GP2 tyres

The latest generation of GP2 drivers have given their thumbs up to Pirelli’s newest GP2 tyres, which have been designed to replicate the characteristics of the 2013-specification Formula One tyres. 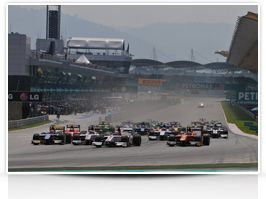 The first round of the GP2 championship took place in the heat and humidity of Sepang, exactly as was the case last year, with Pirelli nominating the P Zero Orange hard tyre and P Zero Yellow soft tyre – an even more extreme selection than the tyres chosen for Formula One (hard and medium) or for the Malaysian GP2 round last year, which were also hard and medium compound. Each driver has an allocation of three sets of the harder compound and two sets of the softer compound in GP2. The new GP2 tyres have been designed to put the emphasis on performance, challenging the drivers to get the most out of them with the correct tyre management to enhance their performance. This was clear from the very beginning, with the times recorded in free practice actually faster than last year’s qualifying times. Malaysia is one of the toughest tests that exists for the tyres, thanks its high temperatures in excess of 30 degrees centigrade, frequent monsoon rainfall and abrasive track surface. Rapax driver Stefano Coletti went quickest in the half-hour qualifying session on Friday, scoring four additional points. All the drivers apart from Rapax’s Simon Trummer used the soft tyres. Most drivers opted for two runs on the softer tyre, using both sets allocated to them, with the top 14 drivers all within one second. At the start of the 31-lap feature race on Saturday, Racing Engineering driver Fabio Leimer made an excellent getaway to move straight up to second behind Coletti, both drivers having started the race on soft tyres. Carlin’s Jolyon Palmer adopted a different strategy, starting from P22 on the hard tyre but taking the lead on lap 12 when the drivers in front of him made their mandatory pit stops. Palmer moved onto the soft tyre on lap 21, finishing sixth and making up 16 places compared to his grid position, thanks to a clever tyre strategy. Russian Time driver Sam Bird ran a different strategy based on using the hard tyre twice but a drive-through penalty meant that he could do no better than seventh, from a start position of fifth. Coletti pitted on lap six to move from softs to hards, with Leimer making the same move on lap 11. Although Leimer rejoined behind his Italian rival, this meant that Coletti had greater tyre degradation in the closing stages of the race, which turned out to be crucial. Leimer got past Coletti with four laps to go to take the lead and then his first win since Barcelona in 2011. ART driver James Calado – who had made his stop from softs to hards on lap nine – also overtook Coletti in the closing stages to claim the runner-up spot. DAMS driver Stephane Richelmi finished the feature race in eighth, which meant that he started Sunday’s sprint race from pole. Having lost out on victory in the feature race, Coletti made a great start to take the lead of the sprint race on the first lap, which he was never to use despite a strong challenge from Carlin’s Felipe Nasr, who had saved his tyres for a big push at the end. Reigning GP3 champion Mitch Evans, the recipient of a Pirelli reward, also put in an excellent performance to finish on the podium in his first GP2 race weekend. All the drivers used the P Zero Yellow hard compound tyres for the sprint race. Coletti said: “I made an excellent start and once I was in front I was able to look after my tyres. It was a big step forward from yesterday. I didn’t push on the tyres, so I had some left when Nasr pushed.” Pirelli’s racing manager Mario Isola commented: “As expected, Malaysia provided a very big test for the GP2 tyres, but despite their more extreme nature this year, the drivers all did an extremely good job to manage both the hard and the soft compound. Coming into this round, none of the drivers had any extensive experience of these tyres, so this makes their mature approach even more impressive. Palmer used an interesting alternative strategy in the feature race, showing how a clever tyre strategy can lead to an impressive gain in places. In the sprint race, Coletti showed how much he had been able to learn about tyre management from the previous race, so congratulations to him and to Fabio Leimer for their wins this weekend.” This year’s GP2 season takes in 11 rounds and 22 races. The next round of the Pirelli-equipped series takes place in Bahrain from April 19-21.

Drivers give thumbs up to new Pirelli GP2 tyres
Newsroom