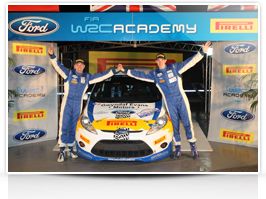 Welshman Elfyn Evans has become the second-ever winner of the Pirelli-supported WRC Academy on the FIA World Rally Championship: a series designed to identify the champions of the future by pitting young drivers against each other in identical Ford Fiesta R2 rally cars. Evans took his fourth consecutive win this year on the all-asphalt Rallye de France to put the title mathematically out of reach of his rivals, even though there is one round of the Academy left to go in Spain at the end of the year. Based in Strasbourg, the rally route took competitors around the slippery asphalt roads of the Vosges region, characterised by hills and vineyards, with traction and grip at a premium on the changeable and dirty surfaces. With uncertain weather conditions added into the equation, having the right tyre was essential. Pirelli brought its renowned RX5 tyres – a versatile compound tyre capable of operating effectively on a wide variety of dry and damp surfaces – and the RE7 for wet conditions. On the final afternoon of the rally, the drivers all took the RE tyres as two spares in the anticipation of predicted rain, and some also used it on the spectator superspecial on Thursday night. Both tyres performed extremely effectively in the challenging conditions, providing the young drivers with the grip and confidence that they needed to make their mark on the Alsace roads where multiple world rally champion Sebastien Loeb learned to drive. 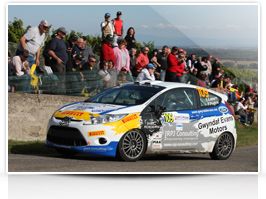 Evans took the lead on the first stage of Friday, fighting with championship frontrunners Alastair Fisher and Brendon Reeves. Fisher retired with a broken engine while Reeves dropped back after a loose stone cut a tyre, leaving Evans with a 30-second lead by Friday lunchtime. He then faced the pressure of managing his advantage all the way to the finish over 16 stages and 342 competitive kilometres, to eventually win by 42.5 seconds from Jose Suarez and seal the title together with co-driver Phil Pugh. “It’s an amazing feeling to finally win this title and I’d like to thank everyone at Pirelli for everything they have done for me,” said Evans. “I’ve used Pirelli tyres practically since the start of my career and I’ve always found them to be excellent: I don’t think I’d be here now if it wasn’t for Pirelli. This is definitely the high point of my career so far and to be honest it hasn’t really sunk in yet. There was quite a lot of pressure during this rally so I was certainly feeling a bit nervous, but in the end it went really well. The whole year was better than I could ever have imagined.” After losing time on the opening round in Portugal, Evans won the Academy rounds in Greece, Finland, Germany and now France. As his prize, he gets the opportunity to contest all the rounds of the World Rally Championship in an R2 Fiesta next year, or step up to a Ford Fiesta Super 2000 for five rounds. “I’ve really not decided which prize to go for yet: they both sound fantastic,” said Evans. “But I’d love to take this opportunity to make the next step in the World Championship.” The 23-year-old has a well-established connection with Pirelli: in 2011 he was Pirelli UK Star Driver, winning a fully-paid drive in the British Rally Championship where he finished second in a Group N Subaru Impreza. His father Gwyndaf was also a factory driver for SEAT Sport, testing and competing with the Pirelli-equipped Ibiza Kit Car and Cordoba WRC up until 2000. Pirelli’s senior tyre engineer Matteo Braga commented: “Congratulations to Elfyn on a well-deserved title. Throughout the course of the season he has shown himself to have everything it takes to succeed: speed, maturity, confidence and consistency both on gravel and asphalt. One of the most impressive things about Elfyn’s progress all year and on this event as well is his vision of how to manage a complete rally from start to finish, which has also been reflected in the way that he manages his tyres and gets the most out of them. The standard of competition has been extremely high this year and Elfyn has also been pushed hard by other drivers whose luck has not always matched their talent. Despite the changeable and slippery conditions here, which were far from optimal, our RX and RE compounds once more allowed the drivers to demonstrate their skills to the best of their abilities.” The final round of the WRC Academy in Spain takes place from 8-11 November.