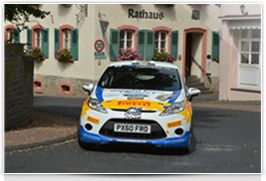 British driver Elfyn Evans has won the latest round of the Pirelli-backed WRC Academy, which took place last weekend on ADAC Rallye Deutschland, based around the German city of Trier. The win marked Evans’ second consecutive Academy triumph, following his success on Rally Finland earlier this month and consequently he leads the drivers’ standings by 35 points from Australian Brendan Reeves. The Academy series is designed to highlight the rally champions of the future, and Evans has already proved his talent by being selected for the Pirelli UK Star Driver scheme in the past, competing on the British Rally Championship. Evans led from the first day in Germany and eventually won by more than a minute. On one of the most challenging asphalt events of them all, characterised by slippery surfaces and frequently-changing weather conditions, the young drivers used Pirelli’s RX5 and RE7 asphalt tyres for the first time this year. The RX family of tyres is among the most versatile in Pirelli’s competition range thanks to a lightly grooved tread pattern, a square profile and a particularly rigid structure. These characteristics help steering precision and provide a rapid response in dry conditions, while maintaining the strength and durability to cope with prolonged high speeds and longer stages. The RE tyre is used for damp conditions: similar to the RX but with a less rigid construction and different tread pattern, as well as a more rounded profile to ensure a perfectly controllable response in all conditions. Evans, the son of former world championship driver Gwyndaf Evans, said: “We had a difficult start to find a rhythm and the set-up of the car after shakedown was cancelled. It took a while and it was a lot more slippery than we expected. We had a couple of moments but we were able to build our advantage from then on. We’ve just concentrated on having a clean rally without taking too many risks and I was glad to be at the finish. It’s another big boost for the championship.” At the end of the fourth round of the series, Pirelli’s senior tyre engineer Matteo Braga commented: “All the drivers who managed to get to the end of the rally did a brilliant job. It was a very tough rally where the conditions were never completely dry or completely wet, so the drivers really had to rely on their talent. Elfyn Evans had a perfect weekend, while Brendan Reeves and Timo van der Marel also did very well – having clearly benefitted from the WRC Academy training session in Lommel, Belgium, before the start of the event, where they were able to get used to asphalt. This was the first asphalt round of the year so it was a big challenge for all the drivers with plenty of hazards, as many of them found out.” The next event of the six-round Academy takes place at the Rallye de France-Alsace from 4-7 October, again on asphalt. ENDS For more information about Pirelli, please contact Anthony Peacock on +44 7765 896 930 or anthony@mediatica.co.uk